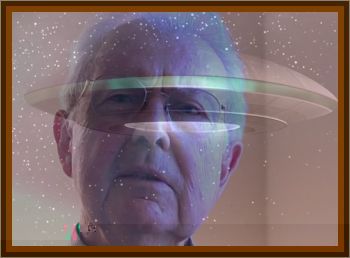 In the video posted to YouTube (Below) on July 8, 2015 by Mutual UFO Network, Johnson, who had a distinguished career in the Air Force that spanned 33 years with active service in the Second World War and the Vietnam War, reported observing two silver colored UFOs about 6' in diameter that approached his aircraft.

According to Johnson, the two UFO discs approached his plane flying very close in formation. As the discs flew past his aircraft, they separated, one flying above and the other below. The astonished pilot looked in the other direction to see the disks flying away, but did see them. He looked around in all directions but the disks had vanished into thin air.

He got in touch with ground control and asked if there was any other airplane flying in the area. He was told there was no other traffic on that Sunday morning.

His testimony is remarkable and there is a buzz in the UFO community about it. Testimonies by professional pilots, especially highly experienced military pilots, are valued highly because they are considered the testimony of reliable witnesses. Johnson, in particular, is a distinguished Air Force pilot with a long career and extensive experience. No matter what one believes about UFOs, his testimony cannot be set aside frivolously, as UFO Sightings Daily editor Scott Waring comments:

Now this is a distinguished pilot with a long career in the area. He is a hero, fighting for America. If we can’t believe in our heroes then we are lost. This sightings shows that the disk separated to allow the aircraft to move between them. This is probably the way some UFOs scan the aircraft. To record the military aircrafts design, armaments and capabilities.

In a declassified intelligence report on the sighting filed by an intelligence officer Major John E. Albert in 1952, Johnson said the disks had no visible means of propulsion and left no visible trail or exhaust.

Such details suggest to UFO enthusiasts a flying machine that was the product of technology much more advanced that human technology. Considering the fact that the sighting occurred way back in 1952, it is unlikely that the U.S. Army was engaged secretly in research and development of a flying disk based on technology as advanced as indicated by Johnson’s report.