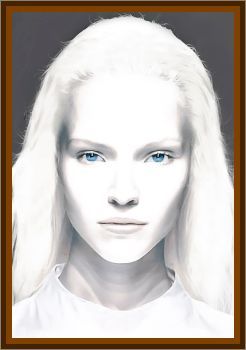 Carlos & Anita Jimenez had just returned home from shopping on a clear sunny Sunday afternoon. Carlos unlocked the outside door and both carried their groceries into the kitchen, while they were stocking the cupboards, Anita heard a noise upstairs. She went to the foot of the courtyard stairs to listen again and sounds resembling soft footsteps. Both, with Carlos in the lead, went upstairs to check. They examined all three bedrooms on the floor and there was no sign of any intruders. As they walked past their own bedroom, Anita had a strong feeling that someone was in there. She grabbed her husband's arm and both waited for almost a minute. And then they heard the soft footsteps inside the bedroom. Together they rushed through the open doorway.

They stopped short, gaping in astonishment. Standing on the other side of the bed was a beautiful young woman. She looked shocked at first, and then her expression was a blend of frustration and dismay. Anita described the intruder as about 5' 6" tall and slender, with a honey gold tan and an exuberant mass of curling and wavy auburn hair. She had golden hoop earrings and sandals to match, she wore skimpy attire. Anita described it as an avocado green French swimsuit and a bolero jacket of the same color with elbow length sleeves. The intruder had what looked like a white plastic cast on her left forearm.

Surprised, both asked the intruder who she was and what was she doing in their house. The intruder looked at them for a long moment, and then replied in halting Spanish, "My name is Jelu, I am not from here. The she lifted her left forearm. The Jimenez couple saw twinkling multicolored lights along its length. The woman began tapping it as if were a typewriter. Instantly a wall of fine red mist appeared between them and the intruder.

Ignoring their shouts of surprise, Jelu turned and faced the stucco wall behind the bed. She began tapping her thick plastic wrist device again. Carlos rounded the bed in an attempt to detain her. But as his fingers made contact with the mist, he let out a scream and tumbled to the carpet. Anita rushed to her husbands side. White faced and gasping, Carlos tenderly cradled his stricken hand. His fingers and thumb were covered with small red blisters.

Suddenly a circle of golden light appeared on the wall, as if there was a hand held flashlight on the other side. The light circle swiftly grew until it reached from the floor to the ceiling. The light was soft and resembled oil floating on water. The intruder stepped into the light and vanished. The red mist disappeared as well. As Anita pushed open the lattice work shutters, she was surprised to see the intruder yards down the street, heading north towards La Compania church.

In disbelief, Anita realized that the woman had only left 20 seconds ago, and if not for her towering auburn style hair, she never would have seen her, for the intruder was now wearing typical Andean clothes. Both attempted to chase the strange woman but she was seen to hail a local cab and disappear from sight. The police were notified of the incident.