UFO Lands On Farm In Missouri 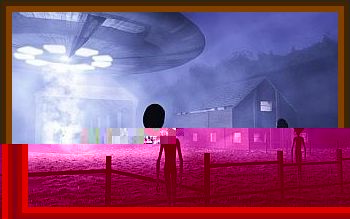 A farming family noted an unusual object in a field to the south of their house. The object was 185' from the house and at that distance, difficult to see.

It appeared as a white object of moderate size, but was felt to be probably a large piece of paper blown there over the previous evening. The family did not go over to inspect it at that time.

The six family members, 5 adults and a teenager, stole occasional glances in its direction over the next two hours, but nothing moved.

Then, at 9:00 a.m., the farm owner left the house to do some chores. At that moment, the object rapidly rose from the ground to a height of 30' to 50'. Everyone else ran out of the house to watch.

It began moving slowly and silently to the west, ascended rapidly, turned twice, and gradually flew away. The family noted that a second larger and more distant object seemed also to be in the sky. These objects came into close approximation and moved off together.

The landed object was described as an oval or egg shape appearing white on the ground but more silvery, reflective once airborne. Its size was judged to be 4' to 5' in the longer dimension, and 3' to 4' in the shorter.

One area of the surface was darker in tone, and allowed the family to note that it was rotating at about once per two seconds rate. The family immediately called the sheriff's department.

A deputy arrived in the afternoon and went to the landing site, took pictures, as well as soil samples. There was a noticeable trace which measured 4½' long and 3½' wide.

The character of the trace was described as depressed, not burnt nor dried. Soil moisture was normal. The force bearing down on the ground was not great as measured by penetrometer tests.

No radioactive heightened readings were measured either.

As time went on though, there was some easily noticeable deterioration of the grass, selectively within the trace. The only slightly reasonable alternate hypothesis that investigators were able to come up with, was something involving a weather balloon.

Some effort was made to check for such launches but the only known source was in the entirely wrong wind direction. The fast take off speed is also against this theory among several other things one might mention.

One other note, when the farmer arrived at the scene he said that the grass at the site was very noticeably swirled. This case was also reported in the MUFON Journal where there were a few discrepancies.

MUFON reports the trace as a tripod of depressed spots within an area of depressed and swirled grass. At one point in the article the trace is described as burnt but more reading seems to indicate that discolored might be a better word.

Testing by MUFON at a college laboratory showed no unusual chemicals or volatile organics, such as solvents. It was found by MUFON that that farmer had previously recovered one of the weather balloons from the local service and knew perfectly well what they looked like.

CUFOS' and MUFON's reports agree on almost all details, and the trace as described by MUFON is probably the better detail. As an aside, the family described their cows and a local meandering coyote as merely staring at the object and not agitated in any way.