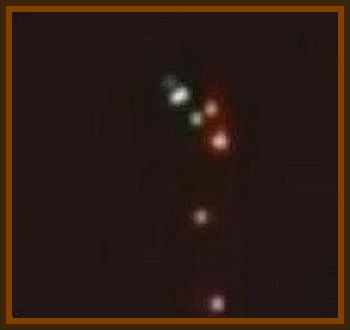 Jemgum is a small village in the northeast corner of Germany. The village is located a few kilometers from the Netherlands border.

A 16 year old student, standing in front of his parents house, observed a bright spot in the sky.

As he watched, a small square object separated from the spot. He observed it gliding slowly towards the ground. After he went and got his binoculars, 10 x 50, he realized the small object, which moved downward at a 30° angle against the horizon, was connected to a bigger object by only a thin bluish/white ray of light.

The big object was cigar shaped and surrounded by an orange colored halo. Seen through his binoculars, this object filled 80% of his field of view. It appeared reflective, almost glaring. Through the middle of the object ran a wide band which was a bit darker and consisted of several colors changing rapidly, orange/yellow/green/blue and sometimes red.

The student’s 8 year old brother called his attention to another, smaller object with the same form coming from the south. The second object moved very quickly in the direction of the first object and suddenly stopped. Excited, the boy ran into 1he kitchen to get his mother. Mrs. S. went outside and observed the two objects together with her children. The second object hovered at a 20° angle. In a southerly direction they recognized a third object with the same shape, hovering motionless in the sky off in the distance. The third object was only visible for approximately 5 minutes. Mrs. S. called her husband, a medical doctor and chemist, so he too could observe the objects they had seen through their binoculars. Dr. S. came out of his doctor’s office, he also observed the objects through his binoculars.

Another ray of light came out of the second object, apparently guiding another smaller object toward the ground, at the same angle as the first one. The roofs of nearby houses blocked the view to the location where the light rays touched the ground.

Investigations showed the possibility, that the rays could have come into contact with 350 volt power lines, which run in the area where the beams appeared to have pointed.

Several minutes after the first object let down the small satellite, a second much brighter and broader beam started to come out of the object and moved slowly parallel to the thin ray in the direction of the hidden satellite, like the antennas of a snail. After it made its way down some of the way, the beam stopped moving. It seemed to wait for the small luminous satellite, which slowly came up again. Mrs. S. remembers:

I guess it runs on light.

When the satellite nearly reached the end of the bright beam, the beam was drawn into the big cigar shaped object followed by the satellite. After that a fog like luminous aura formed a dome around the first big object.

Soon after that the shape of the object changed into a round one. Witnesses got the impression that the object had turned on its axes directly in their line of view. The in and out movement of the satellites from both objects lasted about 10 minutes. After the second object finished exactly the same maneuver as the first, both objects remained visible for another 30 minutes.

Everything was shimmering. As if the object itself was glowing. It’s hard to describe. The object appeared red hot and vibrated. It was not a stationary light. The movements appeared as if one would look into a blast furnace, as if it was radiating heat and the colors were shining out of the heat. The light was very irregular. All the colors blending, gliding and changing.

As so often observed by UFO investigators, the doctor did not call his neighbors to witness the appearance, although several peoples were seen in the street. The witnesses feel embarrassed to call attention to a phenomenon which existence nobody wants to accept.

The neighbors then would have said that the doctor is crazy.

Therefore, he preferred to call a druggist and a captain, both living far away and asked them whether they also saw the strange objects. They did, but the objects appeared very small to them.