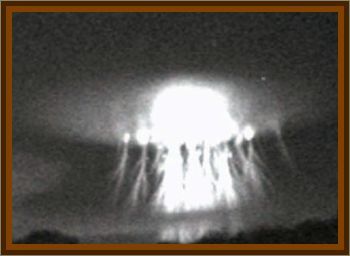 This happened in the late 70’s in Washington, D.C. I was a child of about 7 or 8. My parents had just come home from the grocery store and my siblings and I were helping to bring the groceries in. It was summer, not sure which month, I just remember it was warm outside because I didn’t have on heavy warm clothing.

At some point I ended up on the front walkway by myself for a couple of minutes and it was at this time that something in the sky caught my eye. It was higher than the tree line, but not that vertically distant. It was whitish and somewhat see through and oblong shaped. It contracted as it moved through the sky from the southeast to the northwest. Its movements reminded me of a jellyfish except it contracted laterally.

I just stared at it and had no fear but thought it was seriously out of the ordinary and that I had never seen anything like that before, or since for that matter. It came from over the houses on my side of the street and I lost sight as it contracted/moved off in the distant in a straight line north/northwest, toward Silver Spring, MD/Chevy Chase, MD, over the houses across the street.

I don’t recall telling anyone until I was an adult, not out of fear, I don’t think I thought a great deal of it at the time.