Beings In The Fog 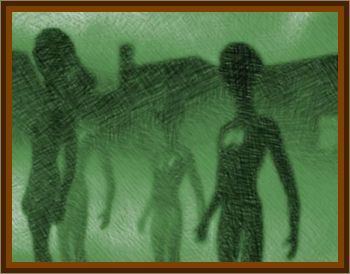 Whatever it was that Hans Gustafsson and Stig Rydberg encountered, you may be certain that they are glad it didn't get them.

The two men were driving home from a dance, just before Christmas. A thick fog had reduced their road speed to 25 miles per hour. Then just before 3:00 a.m., they came to a clearing in the forest that lined both sides of the road.

Noticing a light, the pair decided to step out of their car and investigate. They had gone but a few paces when an odd shape loomed up out of the mist. It was a disk, approximately 25' broad and a 3' high. It was perched on legs about 2' long, strangest of all, it was dimly lit from the inside, emitted no heat, and seemed to be composed of light, with a dark core located in the center.

Then, before the horrified eyes of Gustafsson and Rydberg, four little things began to leap about the saucer in a macabre dance. They looked like animate clumps of mist, darker than the fog, and they had neither arms nor legs.

In awe, Rydberg & Gustafsson, watched the bizarre movements of these jelly bags. Then, without warning, three of the jelly bags fastened themselves to the two young men and a powerful force began to drag the two toward the strange vehicle.

At last Rydberg managed to free himself. He made a dash for the car and lay heavily upon the horn in the hope of summoning someone to their aid.

The effect was instantaneous. Gustafsson, who had been clutching desperately at a post and was stretched out horizontally in the air as a result of the drag exerted on him, suddenly fell to the ground. The jelly bags leapt to their vehicle and entered it. With a high pitched whistle, the saucer took off.

It was three days before Rydberg and Gustafsson had the courage to tell anyone of their experience.

After a barrage of questions and tests, the two were able to lead police officers to the clearing where the marks made by their vehicle were still visible.

Psychologists asserted that the two were telling what they believed to be the truth, and that their statements were based on an actual occurrence.

A test under hypnosis confirmed an opinion that the two had been caught in a strong magnetic field.

It seems evident to many researchers of such mysteries that something has been busily collecting specimens of humans for some unknown purpose for centuries. Certain of our number are being whisked away by time warps, spaceships, wormholes in space, or creatures from the multidimensions of Shadow World, but one uncomfortable fact seems undeniable, something is taking us.