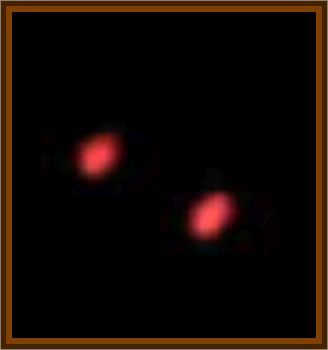 Surabaya as one of the base of defense forces was on standby, visiting unidentified flying objects every night for a full week from the 18th to 24th, September 1964.

The uninvited guests appeared simultaneously both on the radar screen and with the naked eye, so it is classified in the testimony of RV, Radar Visual Sightings.

The unknown objects began to act after sunset and disappeared before dawn. There are things that move like a plane or helicopter usual, but some are doing a sudden movement of movement. The activities of these strange flying objects were centered inside the triangular area of Surabaya-Malang-Bangkalan.

The weather conditions in the area during that week were sunny.

The strange objects according to the description of eyewitnesses are black objects that sometimes show a longer tail of fire than a gas flue gas that is lighting up its afterburner.

Though its body was hidden in the darkness of night, it carried a very bright lamp at the bottom.

One witness happened to see the shape of its body that reflected light from below and described it like a mango because of a bluish green ellipsoid.

Another eyewitness described the UFO's light as a car's taillights.

An Air Force pilot who one night happened to be near the city of Porong, described it as round like a traffic sign but turned bright red and seemed to drift towards Surabaya without sounding at all.

The objects sometimes emit a buzzing sound like a gasing that is completely different from the sound of a gas emitter and a piston plane.

The hallmark of this UFO case is that the unidentified flying objects were greeted with intense gunfire from our air defense artillery guns. In the history of UFO greetings with other airborne invasion gunfire only occurred in the Kurillen Islands occupied by the Soviet Union in the early 60s.

The UFO was not able to be shot with a cannon, because no one was shot down.

From the observation with the radar turns out, if our shots hit the target, they immediately changed the height. They are flying not high, only about 4000' only. With the incessant artillery fire targeting the air above the densely populated areas, there is no escape from the casualties. Several people sitting outside their homes in the Sidoarjo area were hit by shrapnel. Perhaps they were enjoying the coolness of the night so less attention to the dangers of air.

The unidentified flying objects also once seemed to land at night in the south of Surabaya.

The next day a Navy fighter came to the spot by helicopter, but found no traces.

The radar station in Ngliyep, Malang, approximately 75 miles south of Surabaya, catches targets circling above the beach and sometimes stops. In the area was once rumored about the landing of a round object in the middle of the corn garden. According to eyewitnesses of a farmer who guarded the cornfield from the object, two foreigners wearing a shiny, silver colored outfit. They blond and asked the farmer:

The peasant report was just a laughing stock.

For those who study the UFO problem, it is similar to the case in the United States that occurred in the 60s as well, reportedly a blond UFO creature who speaks in a German accent.

The state's view of the Surabaya incident is reflected in a review of the staff of the National Air Defense Command entitled: Unknown Flight in Sector II, Surabaya

Dated September 29, 1964 concluding that the unknown target as reported has indeed existed, consisting of ordinary aircraft and unmanned aircraft, that the targeted activity is an opponent activity, and that its purpose is for nerve warfare in addition to indirectly affecting the wheels of the economy.

Regarding electron control is most likely done from the mainland, from the oceans have the possibility, too, while the control of the air is technically negligible. In essence they thought the UFO was a secret weapon of the British Navy because at that time it was indeed the British carrier Victorious, with several other warships was located more or less south of Kendari on his voyage back to Singapore after entering the Indian Ocean through the Sunda Strait.

The breach of Surabaya's air defense by unidentified flying objects and the excesses arising from airborne attacking cannons by itself creates social unrest. Therefore, on October 8, 1964 the Presidential Official of Dr.J.Leimana felt the need to issue an appeal to the people to stay calm and not create a murky atmosphere and forbidden to make rumors and interpretations.

Prior to this announcement the author was in his position as Scientific Adviser Minister/Commander of the Air Force asked his opinion about the incident in Surabaya by KOTI KOTI Rear Admiral Air Sri Mulyono Herlambang. I pointed out that the incident was similar to the incident that hit the US capital of Washington DC in 1952. The difference is that the capital was not in an atmosphere of confrontation and that deployed Lockheed F-94 all weather hunters Starfire.

The difficulty with which our state's tool was made at that time was that if the unknown targets were officially recognized as UFOs, it could create a vulnerability in the relaxation of preparedness and opening up opportunities for the opposite to abuse the condition.