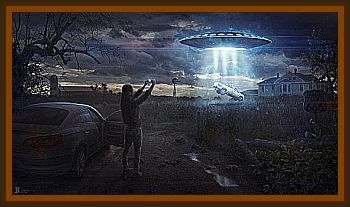 Antonia, 68, was driving to her home in an unidentified hamlet when she entered a small wood.

She found it illuminated, only on the right hand side of the road, by a strange white light that, although it came from in front of her, lit up everything without producing any shadows with such unnatural distinctness that the trees and bushes appeared as if seen through binoculars.

She drove slowly around a curve, and came upon the source, a flat elliptical or lenticular mass of brilliant, but not blinding, light 6' to 10' high and 26' to 30' wide, resting on the road ahead, it extended across the whole road including its grassy shoulders.

When 60' from it, she stopped, and then tried to back up. Although the car was in reverse and the clutch engaged, it slowly crept forward. She gave up trying, and disengaged the clutch. The mass of light, she could see now see, was made up of a great number of very thin, flat luminous plates standing vertically, 2" to 3” wide and 3' to 7' tall, the shorter ones in front the taller ones behind.

In the midst of the light the witness felt her head forcibly turned to the left. She then perceived an ever more luminous ellipse, 16” high and 12” wide, not far from the car, at eye level, while at the same time she felt as if her brain was removed from he skull for about 3 seconds. Then, only 20” away, she saw a clothed human arm appear, as if it were that of an unseen man standing on the ground. It described a curve front to back, and at once all the lights went out.

At the same moment the witness headlights went out, and her motor died. In darkness, she heard a slight click, and a sound like a sliding door opening. Her car, which had by now had come back onto the paved road, stopped. 2 white luminescent geometrical shapes. vertical rectangles, capped with slightly wider equilateral triangles, 32” tall and perfectly flat, like paper cutouts appeared ahead of the car and approached to within 20” of its hood. The witness had the impression they were alive. Then she felt 2 electrical shudders running from head to toe, and lost consciousness.

She was awakened by a sound like a pistol shot, beside and behind her, something struck against the car. She heard a voice say:

Oh, we have killed her.

She found that she was still sitting at the car’s steering wheel. Looking at her outside rear window mirror, she could not see it. On opening the window and feeling, she found it missing from its supporting arm. At that moment she felt that her legs too were gone, and cried out: My legs. Then sensation in them began to return. Her feet, she found, were now slued over to the right side of the car, which had not been so before. Looking about, she found that the car was now standing at the exit of the woods, 100 yards beyond the place where she had lost consciousness. All was dark except for 2 small lights before her, which she took at first for 2 very bright, low stars. She turned on her headlights, and then saw that they were artificial lights, which were sunk into the lower portion of a disk shaped object, hovering motionless 10' above the road, 10' to 15' ahead of her. It’s under surface was convex, metallic gray, with 2 darker 8” squares, it was at least 30' wide. After she had looked at this for 5 minutes, her car’s motor suddenly started up of itself. Immediately thereafter the UFO’s lights went out, and it silently flashed away, buffeting the car with a shock wave as it left.

Antonia drove home, arriving 55 minutes later than she had expected to. On her arrival, her dogs shunned her. She could not sleep that night. In the morning she discovered a painless tear in her skin running from her anus to her vagina, whose lips were swollen and numb. On washing out her vagina, she found that it was stuffed with earth. At that point, her memory of the event returned.

She went to the car and returned to the site, where she verified that her car’s tracks were impressed on the road shoulder where it had gone around the luminous mass. The broken off metal back of her rear view mirror was found by the road at the entrance of the woods, 250 yards before the point where she had noticed its absence, no fragments of its glass were to be found. When Antonia had the mirror replaced, the mechanic was surprised to observe that the car was strongly magnetized.

For 2 weeks she was hardly able to get to sleep. During this period, when she was drowsy and half sleep, vivid quasi dreams repeatedly came to her conscious memory. She was able to remember that she had found herself in a circular room, dark except at the center, where there was a light from no visible source.

Here, in front of her, was suspended by metal pipes attached to its ends a green hemi cylinder 5' long, onto which, by persons unseen, she was forcibly placed and twisted about into various extreme and painful postures, she called this a vaulting horse.

During this she could glimpse 2 figures, one on each side of her, standing looking at her, they were not very tall, and wore close fitting one piece suits one of them had an officer’s collar and wore a black skullcap and had a narrow black mustache. Both appeared to be Chinese. One, with the cap, was smiling tenderly at her; the other looked evil and malevolent. She could hear others, whom she could not see, murmuring. Also a hand was seen, holding a sort of toy windmill, with sparkling points of light.

In the dark wall were visible two dimly luminous, very small portholes. Later, she felt herself standing, being moved about as if someone was dressing her, and then thrown down onto something hard, after which someone said, in French: She is dead.