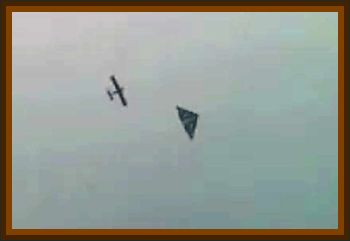 He was multi engine rated and a flight instructor.

2 other commercially rated pilots, and a passenger were also on board.

Having taken off from Opa-Locka, FL to Morristown, NJ, they were headed ENE at 8,000' altitude in uncontrolled airspace under an IFR flight plan but were in radio contact with Jacksonville ARTCC for safety reasons.

Stars were visible in the dark sky

Ground control helped them maintain a correct heading when their 2 VORs apparently displayed significantly large angular deviations toward the east.

About half way between Jacksonville and Charleston, SC over the ocean at least 3 of the occupants saw a light moving across the sky and interpreted it to be a commercial flight at high altitude bound for Miami. But the light began to descend and approach their airplane. The pilot radioed radar control to inquire if any other traffic was seen in their vicinity, now at their one o'clock position high and seemingly southbound.

The answer was negative.

Little turned his landing and taxi lights on. He said later, As the light came closer and closer, it was very apparent that we were going to pass very close and that the aircraft was not making any move to avoid us.

Under the circumstances, he was probably trying to set an example of extra safe procedures for the benefit of the other pilots on board.

Little then disengaged the autopilot, pulled the throttle back and pushed the wheel forward, trying to avoid a head on collision.

We descended to 6,500' but the lights came closer and closer. Then they saw not one but 6, huge, round, bright, white lights in a horizontal row.

We can't get away from him.

The situation seemed hopeless; there was no way to avoid him. We were all going to die because the pilot in the other craft wasn't paying attention.

Little had to shield his eyes with his hands the lights were so intense. Then a soft green light was all over our cockpit.