Fatal Car Crash Is Blamed On A UFO 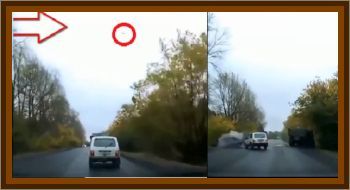 A 60 year old man has died, and his 22 year old passenger who was hospitalised with severe injuries, according to police, after a dramatic car crash in Russia, which has been blamed on a UFO.

Eyewitnesses claim the drivers involved were distracted by the mysterious object that was spotted in the sky just moments before the crash. Video footage shot by a dashboard camera in the car travelling behind captured the events that led up to the crash, near the city of Izhevsk, in western Russia's Udmurt Republic.

It also captures the moment the unidentified object flew erratically through the sky before disappearing behind some trees, just before the crash. The truck can be seen swerving on to the verge to the right of the road, forcing the white car following to swerve into the road to avoid a collision. But a car coming the other way drives head first into the white car before flying off the road.

The truck driver was unharmed, but was treated for shock following the collision.

Other people who were driving along they road confirmed that they had also noticed the object. Witnesses said they believed the other drivers had not been paying attention to the road, as they had been distracted by the object.

Police have confirmed that they are investigating the alleged UFO, but can as yet offer no explanation.