Marine Sees UFO Come Down Out Of Sky 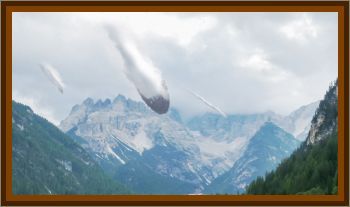 I was on guard duty on the wharf in Iwakuni, Japan, in the summer of 1965. I don't remember the exact date.

The wharf, causeway, goes from north and south, if my memory serves me correctly. Iwakuni Japan has a Marine Corps airbase there. I was used to seeing the Navy jets and Marine jets and helicopters flying around the base. I never have seen a craft which could go staight up into the night sky like this one did, without any noise whatsoever.

I was in the Marine Corps at the time, and was serving on guard duty for several days at this location. There were several wooden boxes along the wharf, and I was basically walking around them. To the east was the ocean. To the west was the base.

The sun had set about an hour when I rounded the corner on some of the boxes. I was facing east.

I saw what appeared to be a bright light, not enough to hurt your eyes, just a bright light, come down from my left, North, and fly just above the water in front of me, to the South. I could hear the sound of the water hitting the object as it flew. However the object made no sound, no engine noise, no jet noise, nothing.

The area was completely silent except for the splashing of the water. I estimate the the thing flew approximately 2' above the water.

The object flew past me, but I could not tell you how far away it was. It appeared to me to be about 300' away, but I could be wrong. It went across the water, for about 300', and then shot up at a 45° angle, and simply kept going up into the night sky. I remember just standing there with my mouth open as I watched the thing continue straight up until it appeared to blend in with the stars in the night sky. Incidently there were no clouds that night, to obscure my sight.

I finally turned to my left and ran over to a building, if I remember right it was a two story building, with the front door facing south. I ran inside, picked up the phone and called the Officer on duty to report what I had seen. When I told the operator that I had just seen what I thought was a UFO. I was told quite abruptly that I did not see anything, and had better not report it, if I didn't want to be labled a kook. I was further told that I would be in very big trouble if I did. I hung up the phone and went back to my post.

I never told anyone but my present wife about the incident, but last night I was watching television and saw the program 'Seeing Is Believing' about UFO's. Some of the stories were strikingly similar to what I had seen, so I decided to write in and let you know.

It took a lot to write this down for you, as I do not seek publicity, or recognition. I am just reporting what I saw. Perhaps someone else has seen something similar. It is nice to know that I am not the only one.