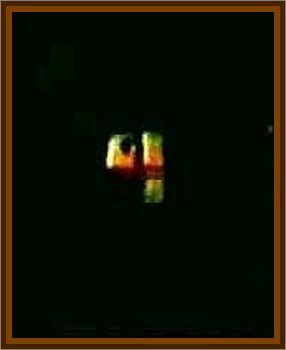 If the evidence of this particular UFO crash case holds as legitimate, it is truly an important and unique report. One Spasso Maximovitch saw an object in the sky that he could not put a tag on. This sighting took place in Israel on September 28, 1995. Spasso used his video camera to capture a silver, glowing object. The object morphed into several objects as he watched, covering a large area of the skies.

After this incident, Maximovitch would become an avid sky watcher. His patience would bring him one more classic experience on June 24, 1996. He saw an object very similar to his 1995 sighting. He began to film the unknown object. Soon, another object appeared west of the first unknown, heading straight at it. Within a matter of seconds, it smashed into the first object, which caused an explosion.

Maximovitch turned his film over to journalist David Ronen, who wrote a column in a weekly UFO magazine. Eventually a copy of the recording went to Barry Chamish, who is largely responsible for the facts of this case being known. Ronens work for the Maariv newspaper has caused copyright problems, and kept him from obtaining many of his films and files. Two of Maximovitch's tapes were sent to Union Skyline Pictures in London for examination. The films were to be, hopefully, included in UFO documentaries. Chamish has concluded that the mid-air collision film would be an invaluable aid in proving the existence of UFOs to the general public. Unfortunately, the last known whereabouts of Maximovitch are a mystery, and he could not be located to get permission to use his film before the productions.

Well respected photo and video analyst, Jeff Sainio obtained a copy of the explosion film, and his complete technical conclusions are found there to all who are interested. In a word, he sees the film as legitimate. The heart of his report follows:

When the 2 objects apparently collide and explode, the apparent size of the light expands by a factor of roughly 2.5, this does not appear to be due to overexposure, but is the real size of the object. The last 2 frames of the video are NOT overexposed, but diffuse, since overexposure is not involved, this indicates he actual size of the explosion is shown. The real increase in size of the bright area is certainly much larger than 2.5. In the video the explosion moves downward, this is probably due to camera motion of the startled videographer, the reference tower is too smeared to verify this conclusion. The explosion is not due to any conventional method I am familiar with, conventional, large explosions require much more than 1/4 second to disappear, and usually generate flaming debris that falls from the explosion. Neither characteristic is seen here. The acceleration, light size, and explosion are not explainable in any convention way that I know of, and this case remains unidentified.

With the testimony of Maximovitch alone, we have a case file with one witness, but the video acts as a second witness, creating an indelible account of what happened in the Israeli skies in 1996. The expert conclusions of analyst Jeff Sainio make this an extremely important and believable case of a UFO crash.