Paced By A UFO 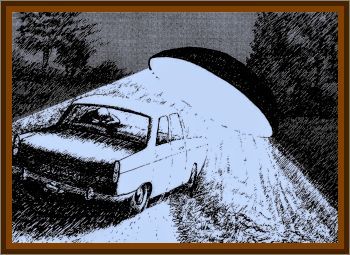 18 year old Barbara Fawcett of Florida, who at 11:30 p.m., was driving to Islamorada where her mother was staying,

Her small Ford was the only vehicle on the highway at the time, so when a large yellow light showed up in her rear view mirror, she became frightened. It made a constant high pitched roaring sound, and when she tried to speed up to get away from it, it overtook her car, swayed up a few feet as if to land on top of it. But at that moment, a car approached from the opposite direction and the bright yellow glow coming from the object covered the road for a second, and then completely disappeared.

Arriving at her mother's home, Barbara told her mother of her experience, rested for a couple of hours and, convinced that it had been an illusion, decided to return to Pompano in order to elude early morning rush hour traffic.

She and her sister, and a toy poodle began the journey back on U.S. Highway 1 and reached the Jewish Creek area at 2:30 a.m. on July 21st. The only other car on the road had turned off at Ocean Reef, and the girls were alone when the dog suddenly began to shake violently, not making a sound. Then the girls saw the yellow light again as it rose out of the swamp west of the highway. This time, it did not look perfectly round as before, but somewhat jagged. It wobbled and floated up, down, and from side to side, Miss Fawcett reported. When the object appeared in front of the car about 15 feet off the ground, Barbara thought she was going to collide with it. But as the car nearly reached the object, it veered to the right under the power lines and landed on one of the large sand dunes to the right of the road. At this juncture, the light became smaller and smaller until it reached the size of a pinpoint and finally disappeared. Less than a minute later, the large light again appeared in the rear view mirror of the car, and Barbara kept going as fast as her car would go and reached Pompano Beach. She later reported the incident to officers at Substation Four in Homestead, the Air Force and Homestead police. Investigation showed an immense scorched area on top of a particular sand dune near the edge of the road where Miss Fawcett estimated the object had landed.