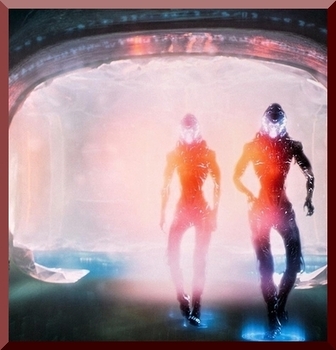 This abduction begins on February 28, 1959, Private Gerry Irwin has been on leave in Nampa, ID, and on his way back to his barracks at Fort Bliss, El Paso when the Nike technician supposedly saw a glowing object flash across the sky right to left above Utah's Route 14 before vanishing behind a ridge. Uncertain of the object's exact nature but fearing it to be an aircraft in distress he decided to check it out and see if he could render aid.

Before setting off he wrote a note:

He then attached it to the car’s steering wheel and using shoe polish wrote STOP on the car’s side.

A short time later a passing Fish and Game Inspector did stop, and after finding the note headed for the Sheriff’s office in nearby Cedar City. Within an hour, Sheriff Otto Pfief and a hastily organised search party found the technician unconscious a short distance from his car. Taken to the local hospital the comatose serviceman was examined by a Dr. Broadbent who declared his vital signs to be normal but was unable to wake him. A preliminary diagnosis was hysteria.

Eventually awakening, a day later, both bewildered and concerned, questions as to the fate of the glowing object were followed by a puzzled inquiry as to the whereabouts of his jacket.

Still somewhat disoriented, Irwin was returned to Fort Bliss and admitted to William Beaumont Army Medical Center for further study. A few days later, minus his security clearance, he returned to duty only to faint while walking the base. On March 15, after fainting again, this time in downtown El Paso, he was taken to Southwest General Hospital where he woke, a day later, apparently suffering from memory loss, his first words: Were there any survivors?

Readmitted to William Beaumont, this time to the psychiatric ward, he spent a month under observation untill the staff, finding nothing wrong, once again recomended discharge.

The following day, without leave, Irwin left the base and boarded a bus in El Paso headed for Cedar City. Upon arrival, April 19, he headed southeast on Route 14 toward the place where it all began. Once there, a quick search revealed his jacket draped over a bush, a pencil wrapped in paper stuck in a buttonhole. Whether he read what was on the paper, if anything, is unclear, but after burning the paper he headed back to Cedar City and turned himsef in to Sheriff Pfief.

On July 10, following a return to Fort Bliss and further psychiatric testing Irwin was readmitted to William Beaumont. Following his release he failed to report for duty and in September, he was listed as AWOL. He has never been seen again.