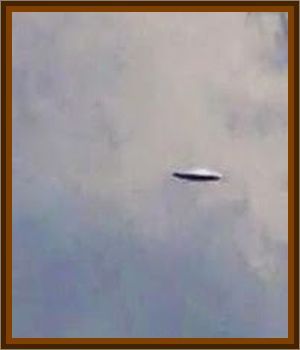 During the spring of about 1951, approximate, I was about 8 years old. It was during the spring, about April or May in the little town called Irving, located about 4 miles southeast of Blue Rapids, Kansas. It was a beutiful spring day, not a cloud in the sky. Myself and several other children were getting ready to enjoy our play peroid during our lunch hour at school outside when I spotted a beutiful, silver disk, sitting in the blue sky, about a 1000' off the ground, estimate.

It wasn't very close to us but could be seen quite clearly if directed to the area of the sky. I immediately pointed this out to the other kids who were also amazed. We kids had never heard of the term UFO, and I was just puzzled, wondering how it was able to stay in one spot without falling to the ground.

When I saw several teachers coming out of our school house to watch the kids, I went over to them and told them about the silver disk and pointed it out to them. At the time, we kids thought it was really neat to have seen something like that but got kind of tired watching it do nothing but hover in that one spot so we went on to playing on the school playground equipment.

After several minutes had passed by, I looked over at the teachers to see if they were still watching that disk and I noticed that the teachers acted kind of upset and concerned. That also puzzled me. After our lunch period was ended, we started back into the school house and I looked over to that portion of the sky, southwest, where the silver disk had been and it was gone. I was dissappointed. This is the first time I've ever reported this sighting but I've always known since that time that UFOs are real, but, I've never been much of a UFO buff.