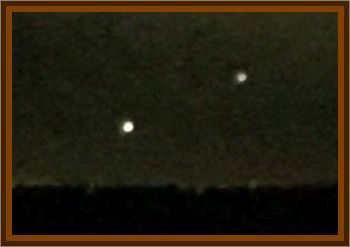 Unexplained lights over marine armored column in southern Iraq. During assault into Iraq, March 2003, I was a member of the 7th Marine Regiment, 1st Marine Division. After the initial attack into Az Zubayr, near Basra, my Regiment reassembled for the movement to Nasariya, about March 22, the war was very chaotic and I did not keep a journal as things were so hectic.

We formed along the highway and started movement well after dark, 9:00 p.m. or so. As an armored vehicle commander, AAV, my duties had me in the turret searching for threats/targets as we proceeded along the highway at about 20 mph. I had a pair of NVG's, night vision goggles, to aid my night vision and needless to say my crew and I were very alert and nervous/excited with the start of combat a few days earlier.

I soon started to notice pulses of dull orange light in the night sky which could be seen with the naked eye.

They would trace an arc and pulse in intensity like a flare but would give off very little light, unlike an illumination flare, and the really curious thing was that when observed through NVG's they still gave off very little light. NVG's amplify natural and infra red light very intensly and I could not understand what it might be.

My crew saw these lights as well and we agreed none of us had ever seen anything like it in training, new weapon? If so, whose?

I called it over the net, radio, to the command vehicle and they acknowledged they could see them as well and did not know what they were. These continued one after another all night and seemed to be close aboard. The obvious reaction was that they were some form of illumination being used by the Iraqi's but I should mention that the surrounding area was desolate arid desert with little place to hide and hardly any terrain features for miles.

We encountered no resistance whatsoever during the movement, and so no enemy to explain the source. There was no sound that could be heard though the engine noise would have made that difficult.

What I found to be really curious was that nobody seemed to care though it obviously, implied some sort of weapon or device was being used and it was not ours. The airspace over the Marine advance was tightly controlled to avoid friendly fire and we saw plenty of helicopters to know the difference.

These were to be seen on later nights as well during our push on Baghdad and it got so that we stopped reporting it at all as we would any enemy contact. I never got an explanation though the Regimental Staff was part of my column and all the officers I asked could not explain it either.

Again, these lights would move in slow shallow arcs like small orange balls that would glow brighter then dull and then brighter again. These would pulse maybe 5 or 10 times then disappear and soon another would be seen in a different direction. These were noticed with the naked eye and did not look any different with night vision goggles? They were seen only up in the air and did not seem to fall to earth and seemed relativly close by.

I should also mention that we were all obviously sober and awake and very alert. On that first night in particular they were seen during most of the movement, 8 to 10 hours along 150 miles of desert highway. The night sky seemed clear enough to make out the stars some of the time but not a lot of moonlight to aid night vision. There was no noticeable effect or purpose to these lights to explain them.