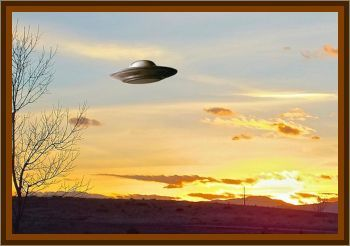 On August 7, 1997, Bob, who was 21, was driving his 11 year old nephew to visit his grandmother, Bob's Mom. As they were driving through Stone State Park, they could see an amber light through the trees which appeared to be going in the same direction at the same speed they were going. As they rounded a curve they could see that the object was quite large, about 70' in length.

The object was triangular in shape with three lights defining its perimeter. It then banked to the right and came so close to them they could clearly see the detail of its underside. Both Bob and his nephew were a little freaked out and frightened by the whole experience.

The incident triggered the memory of two other incidents that had happened to Bob. Two years before, Bob and another friend had seen a blinding bright light suddenly appear in a bathroom. The light just seemed to emanate from thin air, with no apparent source. Bob saw several 4' high beings. His friend also saw them. In another instance Bob remembered translucent angels that appeared at the foot of his bed.

Bob's sister had had some strange experiences of her own like this. She said men with bumpy skin and webbed hands had been standing by her closet.

Back to August 7. As Bob and his nephew turned off the main road, just after seeing the craft close up, something ran into their car, hitting hard against the side. They looked out the window and saw a fur covered animal that was very muscular with a hump on its back. It was snarling, with huge teeth and blood red eyes. Needless to say, they freaked and put the pedal to the metal to get to Grandma's.

Although this report sounds a little strange, it's not. There are many, many reports from around the world identical to this one. This creature also fits the description of the creature seen in Central and South America known as a Chupacabra. There are all kinds of bizarre creatures which appear in heavily wooded areas when UFOs are around. It's almost as if the aliens are letting the zoo loose for a little run and exercise. Hunters have also been chased by huge creatures they could hear and smell crashing through the brush, but could not see. The hunters swear they were being chased by something completely invisible!

The light in the house appearing from nowhere is very common, too. In fact, it is a standard precursor to an abduction experience, as well as beings hiding in the bedroom closet. Yeah, I know it sounds like a boogeyman thing, but grown, sane, and otherwise sophisticated adults have told me over and over again that alien beings will first appear in bedroom closets and then come through the door of the closet. And, I mean through the wood panel, without opening the door.

After they arrived at Grandma's, all three of members of the family saw an orange globe about a mile away. The globe pulsated and then split into two smaller globes. They continued to watch this display for twenty minutes.

Later that night Bob's young nephew had a strange nightmare in which he became paralyzed and felt a needle being stuck into him.

Three days later on August 10, the grandmother noticed unusual puncture wounds on the boy's fingers and toes. Several weeks later, from August 20 to 24, the grandmother and some of her neighbors watched nightly as strange lights flew around the sky within a mile of her home. On several occasions, using binoculars, they could clearly see the triangular outline of flying craft. On two occasions the craft flew directly over her house. On August 27, the grandmother felt itching sensations on her thighs. To her dismay there had appeared overnight large red welts on her legs. In the middle of some of the welts were obvious puncture wounds. Later that same day Bob took his nephew home. It took three times longer than usual and Bob could not account for the lost time.

Towards the end of the month Bob saw the ferocious looking hump backed beast again. Bob's sister saw another strange animal that looked like a cross between a dog and a deer. She had never seen anything like it before. A month later on September 23, Bob and his sister saw a silver flying disk that came towards them. They panicked and drove off. On September 28, Bob had a large cigar shaped craft fly over him. He could clearly see several rectangular windows on the ship. Bob felt as if he were getting communications from the beings in the craft. Bob and his family are now fairly certain they have been abducted.