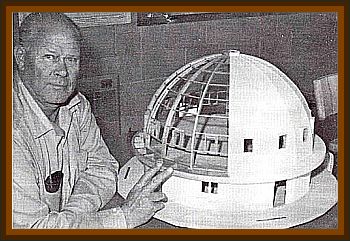 In the Mojave Desert in California is a round roofed building which now acts as a tourist spot. It was commissioned and built by George Van Tassel to house the Integratron in the early 1950s.

This was apparently done on the instructions of an alien being, who mandated that the building's location be in line with the Great Pyramids of Giza.

The story goes that in the early hours of August 24, 1953, Van Tassel awoke to see a strange man at the bottom of his bed. Outside the house stood the mystery person's shiny saucer like craft, which Van Tassel was invited to board. The man stated that he was from Venus and that his name was Solganda. While Van Tassel rode in the spacecraft, Solganda imparted instructions and the knowledge required for Van Tassel to build what would become his Integratron, something that would take him 25 years to do.

Its purpose is said to have ranged from understanding the energy of the universe to time travel. Van Tassel wrote several books on his experiences and even told of his encounters in Life magazine. Needless to say, he was mocked and labeled a crackpot.

Although any member of the public is still free to visit the structure and even wander around the inside of it, the Integratron itself has not resided there for some time, with its location unknown.

Van Tassel was born in Jefferson, OH in 1910, and grew up in a fairly prosperous middle class family. He finished high school in the 10th grade and held a job at a Cleveland airport; he also acquired a pilot's license. At 20, he headed for California, where at first he worked for a garage owned by an uncle.

While working at the garage he met Frank Critzer, an eccentric loner who claimed to be working a mine somewhere near Giant Rock, a 7 story boulder near Landers, CA. Frank Critzer was a German immigrant trying to make a living in the desert as a prospector. During World War II, Critzer was under suspicion as a German spy and died during a police siege at the Rock in 1942.

Upon receiving news of Critzer's death, Van Tassel applied for a lease of the abandoned airport near Giant Rock from the Bureau of Land Management, who managed the land, and was eventually given a renewable Federal Government contract to develop the airstrip.

Van Tassel became an aircraft mechanic and flight inspector who at various times between 1930 and 1947 worked for Douglas Aircraft, Hughes Aircraft, and Lockheed. While at Hughes Aircraft he was the Top Flight Inspector. He finally left Southern California's booming aerospace industry for the desert in 1947. He and his family at first lived a simple existence in the rooms Frank Critzer had dug out under Giant Rock. Van Tassel eventually built a home, a cafe, a small airstrip, and a dude ranch beside the Rock.

George Van Tassel died of a heart attack in 1978.

George Van Tassel started hosting group meditation in 1953 in a room underneath Giant Rock excavated by Frank Critzer, a prospector. That year, according to Van Tassel the occupant of a space ship from Venus woke him up, invited him on board his space ship, and both verbally and telepathically gave him a technique for rejuvenating the human body. In 1954, Van Tassel and others began building what they called the Integratron to perform the rejuvenation. According to Van Tassel, the Integratron was to be a structure for scientific research into time, antigravity and at extending human life, built partially upon the research of Nikola Tesla and Georges Lakhovsky. Van Tassel described the Integratron as being created for scientific and spiritual research with the aim to recharge and rejuvenate people's cells, a time machine for basic research on rejuvenation, antigravity and time travel.

The domed wood structure has a rotating metal apparatus on the outside he called an electrostatic dirod. Van Tassel claimed it was made of non-ferromagnetic materials: wood, concrete, glass, and fibreglass, lacking even metal screws or nails. The Integratron was never fully completed due to Van Tassel's sudden death a few weeks before the official opening.

In recent times some people who visit the unfinished Integratron claim to be rejuvenated by staying there, and experiencing sound baths inside.

Van Tassel was a classic 1950s contactee in the mold of George Adamski, Truman Bethurum, Orfeo Angelucci and many others. He hosted The Giant Rock Spacecraft Convention annually beside the Rock, from 1953 to 1978, which attracted at its peak in 1959 as many as 10,000 attendees. Guests trekked to the desert by car or landed airplanes on Van Tassel's small airstrip, called Giant Rock Airport.

Every famous contactee appeared personally at these conventions over the years, and many more not so famous ones. References often state that the first and most famous contactee, George Adamski, pointedly boycotted these conventions. In fact, however, Adamski attended the third convention, held in 1955, where he gave a 35 minute lecture and was interviewed by Edward J. Ruppelt, once head of the Air Force Project Blue Book. It was the only such convention Adamski attended.

Van Tassel founded a metaphysics research organization called The Ministry of Universal Wisdom, and The College of Universal Wisdom to codify the spiritual revelations he was now regularly receiving via communications with the people from Space.