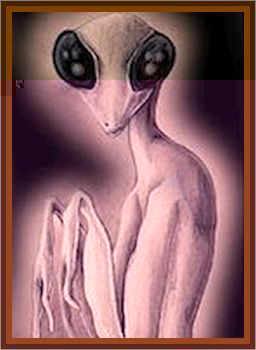 A six month pregnant woman in Clarksville, TN had been taking a nap around 10:00 p.m. when she woke up to see a large craft hovering outside the upstairs window, over a nearby wood shack. Her husband saw the object too. She fainted but then heard a voice in a thick Middle Eastern accent that told her to open her eyes. When she did, she was confronted by a tall creature resembling an insect, thin and white in color, wearing a dark outfit. It communicated with her by using telepathy.

There were several other similar creatures wearing jumpsuits standing in the room. Their heads were large and rounded.

The woman conducted a mental conversation with the leader, and asked it several questions about its origin. She panicked and screamed and began to faint, and some of the creatures began backing away. But moments later a long needle was painfully inserted into her belly. She then passed out, and awoke later to see the taller creature talking to the others.

At one point the woman claimed she saw several helicopters flying around the hovering craft.