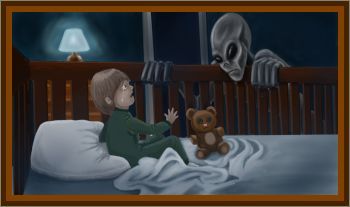 I don't remember the exact date, but my son was not yet walking, he was still using a walker, so he must have been around 6 months old. He was born in April 1994. The strange thing is I don't remember going to bed that night. My son slept in the same room as myself and my ex. His crib was next to the window. I woke up because I heard him crying, it was dark, just a little light shining through the drawn window shades. I went to his crib and reached down to pick him up, but he was not there! I could still hear him crying, and I frantically felt all over the crib thinking he had rolled away from me, but he was not there!

His crying had taken on an echoing sound! I yelled to his father but he never moved. I went to the other side of the room to turn on the light, but it would not come on! I went back to the crib, a bright light flashed on and was beaming through the window, and there he was, still crying, very upset, I picked him up and hugged him close, I pulled back the shade to see where the light was comming from, there, directly above the house was a very large triangle shaped object. It was very low, and larger than the house. If I had been on the roof I could have touched it.

It was astonishing, I could not believe my eyes, It made NO SOUND. It was moving very slowly, I looked around to see if anyone was outside, all the houses were dark, nobody else was seeing this. I got scared and dropped the shade and backed away from the window, and the light blinked out. I stood there for a long time rocking my son back to sleep. When I got the courage up to look again, it was gone. I went back to my bed, I put my son between me and his father, and somehow managed to fall back to sleep.

The next morning I woke up, my baby was still next to me. Strangely enough I did not remember a thing, and wondered how he got there. It was not until later in the evening that it all came back. When I remembered, I quickly checked my boy over, there were no strange marks or anything wrong with him. He was fine, but I found a strange mark on my leg, it felt like there was a bb or something under the skin, it rolled around when I prodded it.

I was horrified, and scared and I told nobody but my mom. The mark is still there, but whatever was rolling around is either gone or buried in the muscle now. It freaks me out to this day. That is just one of many strange experiences I have had. It makes me scared and angry to think this thing that has plagued me my whole life could now plague my family as well. I live on the outskirts of the largest military base in the U.S, but what I saw was nothing from there, I have lived here since the age of 9, I am used to the aircraft from there, believe me, this was not from the base.