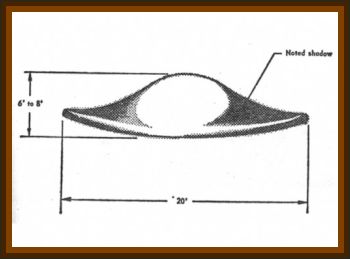 An electrician was standing by the bathroom window of his home, facing west, when he first sighted an object.

He ran to his kitchen where he pointed out the object to his wife. Total time insight was approximately 10 seconds, during which the object flew on a straight and level course from horizon to horizon, West to East.

Mr. and Mrs. Vernon Swigert saw a cymbal shaped or domed disc object or rounded coolie hat to the West, about 20' across, 6' to 8' thick, white without any shine but shadowing on the upper right, Sun from the East, fly straight and level from horizon to horizon West to East heading 90°, first through the window facing West, then window facing South, altitude estimated at 2,000' covering a distance of 5 miles at 1,800 mph.

It was a distance of about 2 miles. elevation 10°, shimmering in the sun as if spinning. No sound or trail.