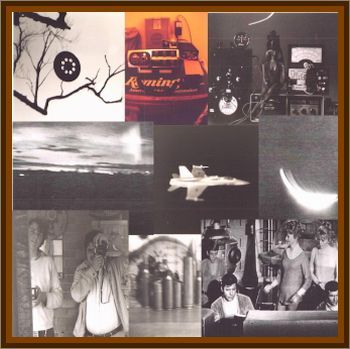 There have multiple major UFO episodes reported to authorities in the Lafayette area between the years 1947 and 1954, Here they are:

Just after midnight the morning of Sunday, July 15, 1947, a Lafayette man named Forrest Hooper, who then lived at 535 S. 4th St., was returning to Lafayette from Logansport.

He was in his car, traveling southwesterly on Indiana 25, when, he said, he noticed a fast traveling red glow, which he thought at first to be a falling meteor.

Hooper said the glow seemed to be coming from the vicinity of Logansport. But it did not fall to the ground like a meteor. Instead it traveled along at high speed until it disappeared from view.

It had a strange, dark red glow in the form of a disk as it journeyed across the sky.

Hooper added that the object moved too fast to enable him to get any better look, and its speed prevented him from getting much of an impression as to its size.

On November 19, 1951, a flying saucer trailed by two Air Force jets was reported flying east over the Elston area about 9:00 a.m. by Carl Hartman, who lived two miles south of Lafayette on Shadeland Rd.

He said he was coming out of his barn when he looked up and saw a great big silver disk flying east at jet speed. Its flat side was to the ground, he said, and its groundside shape was generally round except for a rectangular protuberance at the rear.

The jet planes, he said, left vapor trails, the flying disk none.

A check at the Civil Aeronautics Authority office at Purdue University brought the information that no jet planes had checked in by radio at that hour, but that it was possible that two were in the area since some jets are almost constantly in this territory.

The CAA representative, Raymond King, said he had no information or reports on a disk, or the two planes.

At 9:10 p.m. Saturday July 12, 1952, dozens of reports from residents of Tippecanoe, Clinton and Montgomery counties poured in, telling of a fiery object whizzing across the skies.

It was the most widely reported flying saucer since the UFO craze began in 1947.

Among the observers were Mr. & Mrs. J.F. Shriner, Rt. 7, and their guests, Mr. & Mrs. John Arnold, Lafayette, who were on the side porch of the Shriner home.

Mrs. Shriner said the object was shaped something like a funnel with the small end leading and was brightly luminescent. It looked like a shiny fish tail with flames shooting out the back. It was overhead at about 2,500' for five or six seconds.

At Purdue Airport, the CAA officer said observers there had seen no flying funnel, but said they had received many reports of it, especially from Indianapolis.

UFO reports over the decades always have seemed to be more credible when turned in by people like airline pilots or policemen.

Lafayette's most spectacular UFO account came from a state trooper, who saw its eerie light near Clarks Hill in 1954, and tried to follow it.