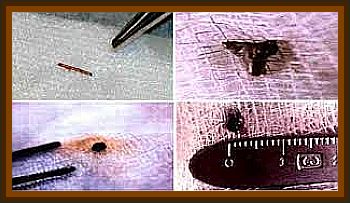 Neurologist Dr. Michael B. Russo says that he initially didn’t know what to make of the first few patients who told him they’d been abducted by aliens from outer space.

Their doctors sent them to me because they had headache pain or some sort of neurological problem, he said.

Their primary physicians didn’t know they were having the problem due to abduction. But I would find out as part of my interview when I would ask how long they’ve had the problem, when did they first notice it.

Then they’d tell me.

As part of his regular testing of patients, Russo used his $200,000 dense array electroencephalography, or DEEG, machine, the only one of its kind in Hawaii, to map the electrical activity in the brains of his patients.

New patients, including several from the Big Island, came in with similar complaints about being abducted, leading Russo to wonder if there was anything the patients shared in common when it came to brain wave activity.

The patients were just coming to me, and I started noticing patterns across the patients. I’ll see 3 or 3 patients with something that’s similar, and then I’ll try to find an explanation for what it is I’m seeing, Russo said.

Each of the patients who claims to have been abducted by aliens and believed that a transmitter was implanted in their brain has shown abnormalities in brain wave activity in their parietal lobe.

That’s the area that does visual and auditory integration into higher order thinking, Russo said.

The parietal areas process visual and auditory data, but they can intrinsically create it themselves and then send it to the prefrontal region, where you become aware of it.

Our thinking is that there’s something in the parietal areas that’s generating, the feeling that transmissions from aliens are being sent to the brain.

The electrical brain wave activity of the alien abductee patients looks similar to that of patients who have experienced traumatic brain injury, Dr. Russo said.

Russo, who operates offices in both Honolulu and Hilo, says that he tries to look at the patients’ experiences from their point of view and works with them to try to help alleviate their problem.

I’m not casting judgment about what it is they’re saying and their history, he added.

All I’m saying is that these areas of the brain are similar between patients.

Patients would not come to me if I did not take them seriously and their problems seriously. I don’t discount what they’ve said. I try to make the pain or discomfort or anxieties diminish.

Russo said that when he is performing the DEEG tests, patients will often ask him if he can see the transmitter.

No, I can’t see the transmitter, I’ll tell them. But I can see the brain signals.

Russo said that so far, when he has explained his findings to his patients, they have responded well.

It validates what they’re experiencing. It’s something that can be detected or measured using human equipment, most of what they’ve had is an extraterrestrial experience.

Russo says he has experienced some success using various pharmacological therapies in alleviating the headache pains and feelings of receiving unwanted transmissions.