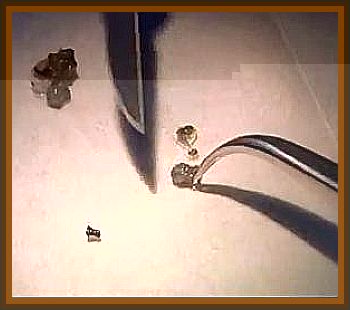 In 1992, at the age of 13, he had a terrifying experience in which he stretched out in his bed and found he was touching another hand, a smooth lizard like hand with curled fingers. He later found himself back in bed with two aliens, one male and one female, standing by his bed.

After this he began to remember many other experiences.

He had seen strange lights outside his Bristol house. He remembers meetings with three alien creatures in the field behind, but his most vivid recollection is of being floated across the hallway and into a UFO outside the bathroom window. He is convinced that he has been abducted many times and that the aliens have some mysterious purpose in which he is involved.

In March 1997 James came to interview me for a student media project. He asked lots of intelligent questions about my research and my views on aliens, and challenged my theory that many abductions are in fact elaborations of sleep paralysis.

He then revealed that not only had he experienced sleep paralysis, but was also an abductee, and in his opinion the two experiences were quite different.

This fascinated me, but more interesting still was that he thought he could prove his experiences were real, the aliens had implanted a small object in his mouth and after a couple of weeks he had removed it.

He now had it safe in a small plastic box but it was too small for him to be sure what it was. He asked me whether I would be interested in seeing the implant and possibly analysing it to find out.

There have been many previous claims that the aliens have implanted small objects into people’s noses, legs and other body parts. Sometimes these are thought to be tracking devices or instruments for measuring body functions or recording other useful data from their victims.

More scary is the idea that they are control devices, used by the aliens to manipulate brain chemical levels or neural functioning.

However it is hard to find out what they really are since the aliens are apparently not very keen on having their devices removed, X-rayed or scanned.

I met one abductee in the States who had small lumps on her arm which she was convinced were implants but she said that the aliens would not let her go to a hospital to have the objects scanned. To my inexperienced eye they could easily have been ordinary cysts. To my sceptical mind she seemed to be using a lame excuse.

She is not alone.

Many implants mysteriously disappear and there are even stories of people sneezing them out and accidentally hoovering them up.

Abductee Michelle La Vigne reports that one implant dissolved before it could be shown to anyone.

David Jacobs has said that most implants disappear as soon as they are removed from the abductee’s body.

John Mack, Harvard Professor of Psychiatry and well known for his work on abduction, has been able to analyse a few of these rare objects in the laboratory.

One turned out to be an interesting twisted fibre consisting of carbon, silicon, oxygen, no nitrogen, and traces of other elements.

This could mean it was any number of ordinary earthly things.

Others were clearly of normal biological material, in other words they probably came from the abductee’s own body.

Another implant that has been thoroughly analysed was taken from abductee Richard Price. A physicist, David Pritchard, subjected it to many tests but, again, he concluded that it was of earthly biological origin.

Of course it could be that the aliens are so clever they can disguise their implants as anything they like, a completely untestable idea that seems highly plausible to some believers and hilarious to some sceptics.

It may be wrong to expect that a phenomenon whose very nature is subtle, will yield its secrets to an epistemology or methodology that operates at a lower level of consciousness.

Since then Derrel Sims, nicknamed the alien hunter, has collected several putative implants. Most are tiny ceramic or metal objects, but he also has some human teeth in his collection.

Along with Dr Roger Leir, he has been trying to analyse objects surgically removed from abductees, but so far there is no convincing evidence for any objects with extra terrestrial features, unusual elements or signs of sophisticated alien technology.

All the research so far seems to suggest that the implants are not really that at all. But imagine the importance if they were.

I was therefore thrilled to be given the chance to example and analyse an implant for myself. I have to say I was not hopeful that this object would really provide evidence for alien civilisation, but I was conscious that it just might.

I honestly do not believe that aliens are visiting our planet and taking people away for unpleasant purposes of their own. I suspect that most abduction experiences are actually either sleep paralysis or other kinds of frightening and bizarre experience which people then interpret as abduction because of what they have read and seen on television.

I also think that the current belief in abductions is getting more and more dangerous and out of hand. Understandably some people are frightened that they might become a victim of the aliens. People who have perfectly ordinary experiences of hallucinations, visions, or even mystical experiences are being persuaded by others that their experiences are created by nasty, devious extraterrestrial creatures.

Children are being unwittingly, or deliberately, terrified by adults who suggest this possibility to them. There have even been suggestions of abduction being used as a cover for sexual abuse of young children.

Unscrupulous hypnotherapists are jumping onto the bandwagon and making money out of persuading people that they are abductees.

Finally some abductees are even allowing unnecessary surgery to be done on them to remove implants with all the risks of anaesthetic complications and infection that any surgery entails.

If the aliens do not exist, as I suspect, then we should try to stop all this madness.

However, I might be wrong. And this implant at least gave me a chance of finding out. If we found that it contained inexplicable materials, mixtures of chemicals that are not found on earth, or evidence of unearthly technology then I would have to change my mind.

It would probably be the most exciting discovery of my life and I would want to start working full time to understand who these aliens are and what is going on.

James Basil’s implant is about 2×3 mm and dullish grey.

I have to say I was not sure how to proceed. I am a psychologist, not a chemist or physicist, and I would need the advice, help and expensive equipment of others if I was going to get anywhere.

I have often heard people arguing that scientists are closed minded, uninterested in mysteries, and determined to cover up the truth about the aliens. This description does not fit any of the many scientists I know, who are mostly fascinated by mysteries of all sorts and spend their lives trying to understand strange things.

But I was still a bit nervous about asking for help. What would the hard scientists in our university say if I asked them to help analyse a putative alien implant?

I plucked up courage and sent out an e-mail to everyone in the Faculty of Applied Sciences asking for help. To my amazement, within one hour I had already had three replies offering help and advice, and by the next day I had more. Not a single respondent objected to my question or suggested that valuable university resources should not be used for such an investigation.

Like me, the other scientists were apparently keen to find out what this object was.

Many suggestions were made, but the consensus seemed to be that we should not use any destructive method and the best approach would be to use use a light microscope first, then the scanning electron microscope and finally X-ray microanalysis to find out the elemental composition.

So James and I went to visit Dave Patton, who routinely uses these instruments in his work with biologists and chemists.

First we examined the object through a stereo light microscope. This revealed irregular edges and a mass of surface detail and coloor. Part of the surface was covered with yellow brown material but we still gained no clue as to what it was.

Then Dave Patton carefully fixed the object onto double sided cellotape, mounted it on a SEM holder and put it into the scanning electron microscope.

I had never seen a SEM in action before.

The pictures were wonderful and we spent more than an hour just examining the surface at various magnifications. James was particularly interested in looking for fibers because of reported fibers on previous implants.

We saw a fiber curling away from one edge and about 50 microns long, some fibrous looking surface structures, and many small, about 5 microns, roughly spherical objects.

Dave said he could not be certain what any of these were but they looked, from his experience, as though they might be dried down organic matter, consistent with the thing having been in James’ mouth for some time. Nothing we saw looked like miniature technology or mechanical components, but then of course alien technology might be unrecognisable to human eyes.

The final step was to use Energy Dispersive X-ray Microanalysis (EDX) to determine the object’s composition.

Potentially this might reveal a combination of elements unlikely to be found on earth. This was performed using an EDAX PV9100 system. The machine shows a series of peaks and troughs at different wavelengths and the set of lines to be expected from any element are known, so that we could look along the spectrum and try to identify each major peak.

Going through it slowly I realised two things:

1st how impressed I was with this apparatus that could tell us, with great accuracy, the elements in the top layer of this mysterious object.

2nd, how very excited I was about getting the answer.

We soon had the answer.

Aside from a little calcium, silicon and chlorine there were just three main ingredients:

Dental amalgam varies considerably in its exact composition but is typically 50% mercury with the other 50% being silver and tin, in varying proportions.

The mystery was solved. The implant was really a filling.

James was initially disappointed but very soon he said he was beginning to feel more relieved than anything else. He even compared the experience with the time he had been tested for epilepsy, and the tests were negative.

Many people may be disappointed by this finding, but others may be similarly relieved. The main thing is that we now know what this implant was. I only hope that many other claimed implants will soon be put to the test. We may yet find a real one, though personally I have to say I doubt it.