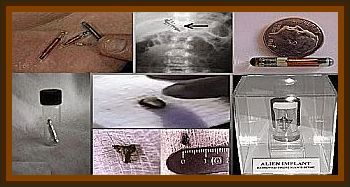 FACT: The media is highly censored, both manipulated and controlled.

FACT: Our government is taking risky yet necessary steps to prepare us for the impending UFO landings.

Human abductions and animal mutilations have been reported for nearly half a century. Our government knows that they are taking place, yet tries to shield us from it.

Eager to find solutions for survival on our planet to continue their species, Zetas from the star system Zeta Reticuli, commonly referred to as the greys, traded technology for permission to experiment on the human race.

As a result, our nation has experienced kidnapping, death and dismemberment of children, adults and animals.

The abduction process usually consists of a traumatic and invasive examination, followed by one or more surgeries:

The taking of human fetuses.

One client reported seeing a dozen clones of himself in holding tanks aboard a starship.

When you are abducted, you usually get another implant.

Shapes, sizes and locations of implants vary. The most common is a computer chip, surgically implanted just under the skin or anywhere on the body, frequently in the nasal septum causing nosebleeds.

Another type is a metal ball about the size of a golf ball, implanted in the organs, liver, kidneys.

The non physical or fourth dimensional type is a flat, square energy grid.

Individuals who have experienced multiple abductions generally have at least two types of implants.

Can you answer yes or maybe to any of these questions?

Had frequent nosebleeds or pain in the joints for no medically explainable reason?

Sensed that you were being watched, or had a waking vision that made you wonder whether you might have been visited by aliens?

Had a bad dream that sent shivers down your spine, paralyzed you, rattled your bed like in the movie The Exorcist, prevented you from screaming for help, and floated you out the window to a waiting spaceship?

Was it wearing a skin tight metallic body suit that lit up? Did its huge head seem out of proportion to its frail body? Were there three digits for fingers? like ET, only not as cute.