Alien Implants - A Closer Look Into One Aspect of Alien Abduction 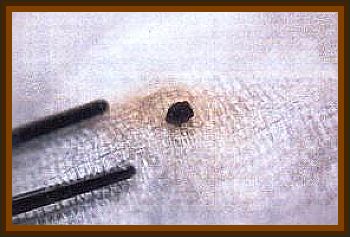 Everything from the release of government documents, to high level testimonies from high ranking military and political figures has ignited a massive surge of interest in the UFO phenomenon from people all over the world.

Unidentified Flying Objects, performing maneuvers that defy our understanding of physics, are now a confirmed reality.

Official government documents prove that defence and government agencies have been examining this topic for a while.

Ask yourself, why is there such a high level of interest from government and military agencies?

The question people are asking has changed from:

Attributing today’s unknown ariel phenomenon to extraterrestrial craft might be a big jump to some, but the jump continues to decrease. There are a lot of factors that are attributing to that decrease, and it comes in the form of body marks and extracted implants from people who’ve claimed to have extraterrestrial contact.

I’m not saying all UFOs are extraterrestrial craft, I believe many of them are also ours, classified projects that come from the black budget world.

There are a great many photographs of such body marks, many of which are in an equilateral triangle pattern of red dots on the wrist or near the ankle. Also common are scoop marks, in which it appears as if a small amount of tissue was removed from beneath the skin, leaving an indentation.

The case of extracted implants is very fascinating, and might be considered real scientific evidence that some of these UFOs are in fact extraterrestrial in origin.

Implants are largely reported by abductees, and those who have had experience with UFOs.

He also spoke at the National Press Club in 2009.

Throughout the years he described what he found in his work, the various implants that he found in people. Perhaps one of the most fascinating facts was that these objects were magnetic in nature, some gave off a radio frequency of 14.7 MHz.

According to doctor Leir, they were fixed, or mobile deep space frequencies. This is a very large amount for a very small object only millimeters in length, roughly the size of a pencil lead.

Some of the objects they examined had commonalities with meteorite fragments, metals such as Gallium, Germanium, Platinum, Ruthenium, Rhodium, and Iridium. They also noted a deviation of nickel from terrestrial rations that the analysis lab couldn’t explain, that some of these implants contained nickel with an isotopic ratio not found on planet Earth.

They also found nano fibers very similar to carbon nano tubes, which suggests the fragments were engineered or manufactured.

According to Dr Mosier:

You don’t find these things in nature. they have to be processed, engineered, and they’re not easy to make.

All the individuals he studied had no noted portal of entry, for any of the objects he removed. There was also no notable visible scar formation, and no disruption in the integrity of the skin.

All the individuals tested positive to X-rays and CT scans showing metallic or lesser dense foreign objects, and there were no signs of inflammation at all which, according to Dr. Lier would be impossible.

All of these surgeries and tests were done with an extremely limited budget, and to understand it further, more money would had to have been allocated to these findings.

One thing remains clear, there are many that believe the UFO topic to be directly correlated with the extraterrestrial phenomenon. There are reports all over the world from a large amount of people whose stories all seem to correlate. Whether it be through friendly contact or forced abduction, something is definitely going on, and there appears to possibly be multiple races of extraterrestrials interacting with humanity, and a very high level of interest from military agencies all over the world.

Here are three quotes out of hundreds I’ve come across that also show who else has done the research, who else is a believer, and who would be in the position to know a little more than we do about the topic.

There is abundant evidence that we are being contacted, that civilizations have been visiting us for a very long time. That their appearance is bizarre from any type of traditional materialistic western point of view. That these visitors use the technologies of consciousness, they use toroids, they use co rotating magnetic disks for their propulsion systems, that seems to be a common denominator of the UFO phenomenon. - Dr Brian O’leary, Former NASA Astronaut and Princeton Physics Professor

Yes there have been crashed craft, and bodies recovered. We are not alone in the universe, they have been coming here for a long time - Apollo 14 Astronaut

Decades ago, visitors from other planets warned us about the direction we were heading and offered to help. Instead, some of us interpreted their visits as a threat, and decided to shoot first and ask questions after. It is ironic that the U.S. should be fighting monstrously expensive wars, allegedly to bring democracy to those countries, when it itself can no longer claim to be called a democracy when trillions, and I mean thousands of billions of dollars have been spent on black projects which both congress and the commander in chief have been kept deliberately in the dark. - Paul Hellyer, Former Canadian Defence Minister