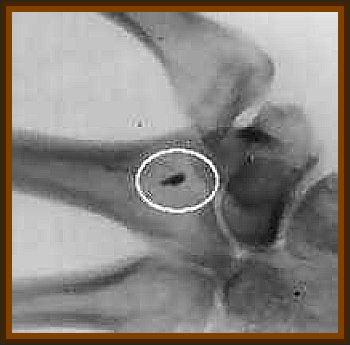 Much has been made of alleged subdermal implants in UFOlogy over the past several decades. Typically, an alien abductee, or suspected abductee, will find a lesion or bump on the skin that strikes them as quite anomalous.

After consulting a physician, these are sometimes opened up and yield what generally look like mineral deposits, often iron. Occasionally the makeup of these implants is anomalous upon analysis.

To skeptics, these are simply the accretion of trace minerals or debris embedded under the skin during an unremembered accident.

To UFO believers, they represent an advanced technology, so advanced it doesn’t even appear to be technology, typically used to control or track abductees.

Could the fairy blast stand be an earlier expression of the alien implant motif? It seems almost certain, regardless of whether the phenomenon it described is mundane or supernatural.

There is further evidence linking the two in an anecdote recalled by Rieti, which is an ancient town and comune in Lazio, central Italy:

One old man told how he went up to the garden at twilight to have a last look at his surprise vegetable garden before retiring. There was a white gull sitting on his prize turnip, the largest one. He started after the bird and kicked at it. When he did the bird vanished and the man took such a pain in the leg that he could hardly get home. The leg got continually worse, swelled up and crippled the man.

There was one night it was particularly sore, and a huge boil seemed to rise on the leg. The man’s daughter, the informant’s wife, was there with several neighbors trying to comfort the man, who was in agony.

They concluded that the boil should be let, and proceeded to do so. As soon as the boil was pierced, a long white string came out and continued to fall in a pile to the floor. It fell of its own accord and the swelling abated as the string accumulated on the floor. The string was kept for years after as proof for unbelievers, but the man always had a crippled leg to his dying day.

This interesting fairy blast variant bears a striking resemblance to an alleged condition referred to as Morgellons. The condition is unrecognized by medicine and thus quite controversial, however, it is generally believed to manifest in skin lesions that produce a peculiar string or fiber like protrusion.

The general medical consensus is that Morgellons is the project of a delusional individual scratching themselves, then the abrasion collecting fibers from their clothing. Perhaps the most famous self diagnosed sufferer is singer Joni Mitchell.

The objective reality of Morgellons is not as interesting as the manner in which alien abductee advocates have seized upon it as a possible symptom of extraterrestrial contact.

In my case, Morgellons, is from direct contact from aliens and part of the genetic engineering process that we’ve all been going through as humans, said professed experiencer Mike Davis.

Davis claims to have suffered other lumps and nodules under his skin.

With this additional data point in place, it seems almost certain that both fairy blast boils and alien implants are describing the exact same anomalous encounter.

What I do suspect is that both witnesses, separated so far both geographically and temporally, utilized the language and concepts of their culture to attempt to describe something so bizarre, so alien, in the original definition of the word, we still lack a suitable vocabulary to discuss it.