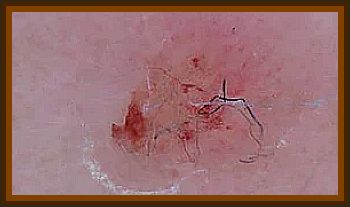 Supposedly this X-Ray shows an alien implant that was later removed from a mans spine.

Is this old news or current news?

Well it is happening now. And how many people know of the latest findings, physical evidence, of extraterrestrial implants?

From the research of the late podiatric surgeon Dr. Roger Leir, chemist material scientist, and nano tube technological expert, Steve Colbern and physicist Robert Koontz, I’ll summarize it for you.

A worldwide phenomenon or perhaps localized by zones but in many cases they are physically detectable. Have you noticed a strange object after a strange dream or sleep paralysis?

Prosaic answers will most likely suffice but in some cases…actual advanced alien implants have been detected.

What are they made of?

Quite often Meteoric Iron, with non earthly isotopes, with cobalt and significant amounts of iridium.

They have isotopic ratios that do not occur naturally on Earth. One was of a class of nickel/iron meteorites called hexahedrites.

Heavier isotopes might have been formed near the galactic core and/or due to supernovas. They are normally irregular and covered with an oily shell/hard coating that prevents body rejection.

Produce no immune response. Biological tissue grows from the metal. This was seen with EDX Electron Microscopy.

Some of the implants emit FM electromagnetic radiation radio signals before removal in scalar related frequencies 93 MHz, 15 MHz, even a frequency used in sattelite space communications.

Seem to have a surface coating, sensitive to phonons in order to retransmit soundwaves.

If you break them they reassemble. There are carbon nano tube electronics in these devices not found in nature.

They seem to be single wall nano tubes.

Dr. Roger Leir mentions that they are often found in many places, rather superficially in the body but also near bones. Nerve cells connect to the devices.

Some of the objects have strong magnetic fields of over 10 milligauss. Some 15% of abductees show significant fluorescent glows on skin area for up to 1 month, detectable with UV-A, but more with UV-B and UV-C.

Small metal detectors and X-rays and Gauss meters can detect them in the body. Off course if with X-rays it’s difficult to locate them CAT scans can locate them more precisely.

No visible signs of entry/no known portal of entry. If entry signs are detected right after an implant event they close up and leave no mark in a day or two.

About 24 implants have been recovered. Some have regular ortho rhombic crystalline structures of sodium chloride that are rectangular and varying in size (Steve Colbern).

Perhaps they are used to generate scalar radio frequencies.

Often when podiatric surgeon Dr. Leir tries to remove them with surgical steel they move away from the scalpel.

If about 2% of U.S. population with various signs of abduction is really indicative, perhaps the number of implanted people is, relatively speaking, quite large.

If this is real. How many individuals are being implanted or monitored in other ways by non grey ET beings? This is constantly news because it is still happening and new evidence is always coming up. See this evidence directly obtained by Joanne Summerscales from AMMACH at the 2013 IUFOC.