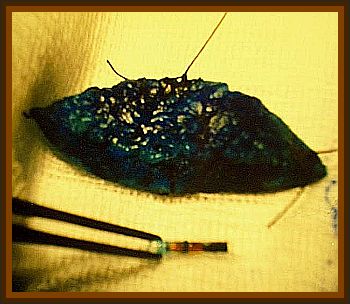 For years the general public has been tantalised by stories of UFO sightings and even, in a few cases, actual alien encounters. Proof of the claims, however, has been disappointingly elusive. More often than not, it simply comes down to taking a person’s word for it. In a few instances, photographs have been taken, but, inevitably, questions always arise about their authenticity.

Hard physical evidence has been almost the Holy Grail of UFO research. But some now believe they have it.

Reports from people who claim alien abductions first became widespread in the 1960s and 1970s. Often, the supposed abductees would describe experimental procedures that the aliens had allegedly performed on them.

Sometimes, they would even insist that the aliens had inserted something inside them. Soon, these alien implants had become a staple of UFO lore.

Dr. Roger Leir was a successful Californian podiatrist, foot doctor, when he first heard stories going around about people who claimed to have alien implants inside them. Although he had believed in UFOs since he was a child, many of the newer developments in UFO lore, such as reports of alien abduction, struck him as fanciful.

He didn’t believe for a second that any of the alien implant stories were true and he decided to disprove them. When he heard of a patient complaining that she had an alien device implanted in her body, Leir offered to do the surgery required to remove it for free.

To his amazement, he discovered that she really did have a mysterious object inside of her after all. For him, it was the beginning of a journey of discovery.

Since then Dr. Leir has become the goto guy for alien implant removal. He is inundated with inquiries from people who believe they have something strange inside of them.

Leir and a small panel of scientific colleagues evaluate the reports they receive but, because of limited funds, can follow up on only a few. Nevertheless, over the years, Leir has performed over a dozen surgical operations designed to remove anomalous objects from inside people’s bodies.

Some of these operations have even been performed on camera and the footage has been shown in television documentaries.

Experience has shown that, usually, the objects that are supposedly alien implants are metallic. Some emit radio frequency waves. Many are attached to nerve endings within the body, causing patients to cry out in pain when they are removed, even after they have been anaesthetised.

Leir has found that sometimes there is a scar in the external part of the body where the implant is located, but often there is not.

While inside the body, the implants are often wrapped in a protective membrane.

Of course, several of the alien implant objects which have been removed have been sent to laboratories for analysis. Alas, none has been so definitively alien that it represents irrefutable proof of extraterrestrial contact.

Perhaps the alien technology is simply beyond our understanding, just as one of our own electronic devices would be if we handed it to a tribe in the stone age. Some also suspect that the implants cease functioning once they are removed from the body.

Dr. Leir performs surgery only on patients who have not previously undergone hypnosis, because he knows that UFO sceptics will claim that the hypnotic experience induced them to imagine all kinds of fantastic things. Many patients do undergo hypnosis afterwards, though.

In these hypnotic regression sessions, reports of the patient sighting UFOs, or even being the victims of alien abductions and carried away in them, are very common.

If the alien implants really do represent alien technology then, what is their purpose?

The most sinister suggestion is that they are some kind of mind control device.

Since the victims eventually sought help for their condition, if that were so, they would seem, at the very least, to have been of limited effectiveness.

Perhaps they are just monitoring devices which send back reports to UFOs and the aliens on the victim’s location and condition? Stories of repeat alien abductions, even lifelong abductions, are very common.

This suggests that the aliens are interested in monitoring specific individuals. We have no way of knowing what makes them choose one person rather than another for their invasive procedures.

The idea of aliens implanting devices inside our bodies is deeply frightening. We can only hope that, if these alien implants really are of extraterrestrial origin, they can one day offer clues about who or what their creators are, and what their intentions might be.