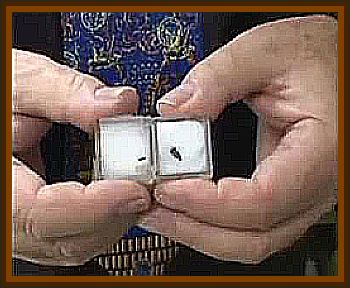 A leading scientific researcher into UFO phenomena is to present findings at a UFO conference in New Zealand that indicate humans have received implants made of substances not found on earth.

The researcher and surgeon, Dr. Roger Leir, is to attend the September conference in Rotorua where he will share how his surgical team in California has performed 13 surgeries in which they removed objects suspected of being alien implants from people.

These objects have been scientifically investigated by some of the most prestigious laboratories in the world, said Dr Leir, a podiatric surgeon of 40 years.

These labs include the Los Alamos National Labratory, New Mexico Tech and the University of California in San Diego, he said.

Dr. Leir said subsequent lab findings have baffled highly qualified scientists because the implants show anomalies in regard to their biological and metallurgical structures.

The objects defy earthly scientific explanations and show isotopic ratios not of this world.

The interesting finding is that the membrane around the objects was composed of material from the patients own bodies before the objects were inserted. In fact, if medical science could duplicate this, we could perform implant procedures in the human body without risk of rejection, he said.

Dr. Leir said it was strange how his team could not find any entry wounds and the molecular structure of subjects skin and other tissues were not damaged.

Its possible the implants, which have magnetic properties, act as monitoring systems through being attached to peoples nervous systems.

Im of the opinion that implants provide evidence that the abduction phenomenon is a reality, said Dr. Leir.

Dr. Leir was one of nine international guest speakers at UFOCUS NZ's Future Perspectives Conference to be held in Rotorua on September 29 and 30 2007. Speakers Mary Rodwell, a nurse, and Bill Chalker, a bio chemist, both from Australia, also presented forensic and genetic evidence suggestive of extraterrestrial contact with humans.

20 years of independent publishing is a milestone, but your support is essential to keep Scoop thriving. We are building on our offering with our new in depth Engaged Journalism platform.

Now, more than ever sustainable financial support of the Scoop Foundation for Public Interest Journalism will help to keep these vital and participatory media services running.