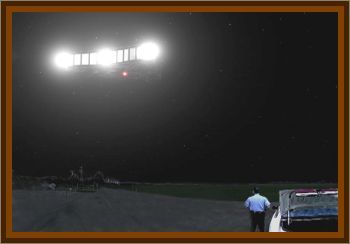 Shortly after 4:00 a.m., five on duty Illinois police officers in separate locations sighted and reported a massive, unidentified triangular aircraft. 2 of the 5 officers reported flight characteristics which do not conform to currently known civilian technologies, as the object appeared to move at incredible speeds without making any sound. Sightings in Highland, Illinois, by a civilian who first reported to the local police department and subsequent sightings took place in Lebanon, Summerfield, Shiloh, Millstadt, Dupo, and O'Fallon. Scott Air Force Base public relations office denied any knowledge of the event.

The sightings reports continued, from Collinsville & Caseyville, Illinois, and a race track near Fairmont Park. The St. Clair County Sheriffs Department & Illinois State Police received reports of bright lights in the sky with a humming noise.

One interesting descriptive detail in the April 20 Illinois UFO sightings was given by a female motorist driving near Interstates 255 and 64. The motorist alleged that a bright light in the air impaired her ability to drive. A similar complaint compares to the Illinois incident, in which a Cincinnati resident reported to the Forest Park Police Department that a UFO seen in the vicinity of the Forest Fair Mall impaired her ability to drive. The police report of driver paralysis caused by a UFO sighting is retained by researchers, dated October 18, 1994.

Lastly, the KTVI Channel 2 newscast from April 21, 2000, informs that case data of the UFO sightings on-file at the police offices were submitted to investigators at Scott Air Force Base. This is an unusual report, as the United States Air Force does not officially investigate UFO sightings since the closure of Project Blue Book. Given the report by KTVI news, it will be necessary to ascertain who these investigators at Scott Air Force Base would be, and if they are acting in an official capacity.

CASEYVILLE - Police received 6 separate reports from callers between 3:30 a.m. and 4:30 a.m. Thursday, all reporting a strange light in the sky within a radius of a couple of miles, Caseyville Sgt J.D Roth said. The first report came in about 3:30 a.m. Thursday from a woman who said she saw unusual lights in the horseradish field west of Illinois 157 behind St. Stephens Catholic church, Roth said, He & officer Steve Epps left the station and searched the field but found nothing. Then, dispatchers told Roth that a St. Clair county sheriffs department deputy on Interstate 255 reported seeing lights in a field over Caseyville about a mile north of the original sighting. While the law enforcement officers traveled toward the field, they heard radio traffic indicating Collinsville Police had gotten a call about a strange light accompanied by a loud humming in the area of Fairmont Park Race Track which is less than a mile from the Cahokia Mounds Complex. We met up there with other officers , discussed the reports and waited for Armageddon, But it didn't happen. The officers were ready to leave when the Caseyville dispatchers received a 911 call from from the area of Interstate 255 and 64. The woman said there was such a bright light in the air it impaired her ability to drive. While the officers were in route, another call came in reporting a light moving up and down near Illinois 157 and 161. Roth said the calls seemed to be unrelated and by different individuals.

CASEYVILLE - A rash of bright-light sightings early Thursday could have been little green men, but UFO experts are skeptical. Investigators with the National Institute for Discovery Science initially were excited by reports to the Illinois State Police and Caseyville Police early Thursday because they were so near the Jan. 5 sightings in Highland, Lebanon, Millstadt and Dupo. And it occurred just after 4:00 a.m., about the same time the earlier sighting occurred, said institute investigator Roger Pinson. But a lack of identifiable witnesses or a precise UFO description, coupled with a storm Wednesday night that pelted the area with rain, high winds and lightning, quickly fizzled the investigators drive. No one was able to see an actual shape, All people saw was lights. There was no pattern or colors or intensity or proximity to people, that makes it difficult to, for lack of a better word, get excited about.

He admitted there was a 100% possibility the lights seen Thursday were related to the craft spotted January 5, but said it was unlikely.

I'm not saying these people didn't see a UFO like the one there in January, but based on the totality of the circumstances, it's a storm, it's just a could be.

He said most reported UFO sightings occur when the sky is clear, with better visibility that allows viewers to see further and more easily distinguish shapes of the crafts. Illinois UFO specialists said it's not unusual that Thursdays sighting happened within only months and several miles of each other. Sightings usually go in waves, said Forest Crawford of Collinsville, assistant director of Illinois Mutual UFO Network. It's actually very common to have a number of sightings in an area over a short period of time.

But the reports that came in Thursday don't offer the many credible witnesses, both citizens and police officers, who reported sightings from Highland and down through St. Clair County in January more support for their reports. Officials at Scott Air Force Base & Lambert Field in St. Louis, reported no sightings or signs of space craft on their radars. The Illinois State Police received an anonymous call just before 4:00 a.m. Thursday reporting bright lights. And Caseyville Police received 6 calls between 3:30 a.m. and 4:30 a.m., placing the bright lights over a roughly five-mile radius between Fairmont Park and Illinois 157 and Illinois 161.

Flight Path of the UFO

The 8, whose testimonies are shown in this report point to a flight path of a large triangular shaped object that crossed the coast from Lake Michigan just North of Chicago, Illinois, arriving from the northeast and heading southwest at 10:00-10:30 p.m. on the night of January 4, 2000. The majority of the eye-witnesses reported that the object was approximately 80-100 yards long, it was flying at between 1000' and 2000' altitude. The object was displaying extremely bright lights and was flying slowly, estimates at half the speed of a C-5 coming into land.

The object was first sighted by a businessman just North of Chicago, IL at between 10:00-10:30 p.m. on the night of January 4, 2000. The next sighting placed it just north east of Highland, IL approximately 6 hours later, at 4:00 a.m. on January 5, 2000, on the same flight path, still coming from the Northeast and heading southwest. The craft was then observed at Lebanon and Shiloh, IL and it may have changed its course, heading briefly northwest and then resuming its southwesterly course. The change in course may possibly have been designed to avoid Scott Air Force base, but this is speculation. It was then sighted at Millstadt still at very low altitude at about 4:30 a.m. on the morning of January 5. Almost immediately southwest of Millstadt, it suddenly gained altitude to about 10,000' altitude, and was sighted at 10,000' by the police officer at Dupo. It turned north and then briefly east, still at approximately 10,000'. It was sighted within a few miles of Dupo at 6:50 a.m., still at about 10,000' by a school teacher on his way to work. Unusually, the craft may have remained in the Dupo area for about 2 hours.

Therefore, the eye witness testimony suggests that the total flight time of the object was just under 9 hours, originally sighted coming in from Lake Michigan and last seen a few miles from Dupo, IL. The evidence suggests that this flight time may be longer, that it traveled extremely slowly for an aircraft for most of that time. Further, the evidence suggests that the craft was making no attempt to be stealthy. All 8 described the lights as very bright to blinding. It flew at altitudes ranging from about 1000' to 2000' for much of its flight path, but rapidly gained altitude somewhere Southwest of Millstadt, gaining at least 9,000' in minutes.