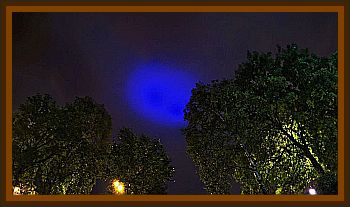 Walking along the North Sea shore facing North, I looked back in southerly direction when a purple light caught my eye. It was a clear cloudless night, my field of vision either way would have been at least 40 miles in Southern and Nothern directions.

The light travelled from south to north direction and moved over land parallel to the coastline. The light did not blink and took 3 minutes from first seeing it, to disappearing in northerly direction. Depending on the distance from me, speed could not be determined. Yet if it had been moving overhead, it's speed would have been 23 miles per minute.

At first I thought it was a plane or a helicopter, but because there were no flashing lights, it must have been something else. I phoned a friend who at the time was the night editor for a large newspaper. When I stated:

I have seen something strange.

His immediate reaction was:

Did you see purple lights in the sky?

Needless to say I was astonished and asked:

Have you had more reports on this?

Dozens of reports, but you are the only one from the West side of the country, all the other reports came from the East side, close to the German border.

All these people had seen formations of up to 30 purple lights moving direct North. I am puzzled to this day.