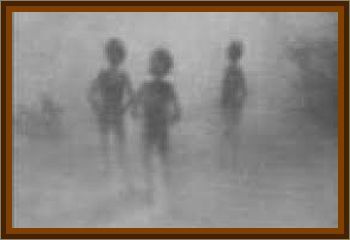 Two women, one named Vera Ignatenko, and a young girl were walking along a canal near some woods when they saw three men approaching on a strange silvery boat in the canal. The beings were man like, wore shiny collarless suits, and had identical pale faces, long golden hair, and large radiant eyes. The beings approached, and spoke in the pure ancient Slavic language (a defunct language spoken in old Russia) apparently wanting the witnesses to come with them to their planet.

The beings claimed that they took one person from earth each day. The beings then walked with the women to a nearby hovering silvery barrel shaped craft with an antenna on top. The women attempted to run away, but could not, feeling a tingling sensation and were unable to scream either. The beings apparently decided against taking the three women and released them, they then entered the object via a stepladder.

Before leaving, the beings demonstrated a holographic model of the solar system with a tenth planet to the witnesses and warned that electromagnetic emissions from earth and radio signals being transmitted into space attracted many negative alien cultures who are arriving on earth uninvited with the aim to exploit the planet for their own interests. The craft then left quickly and silently.