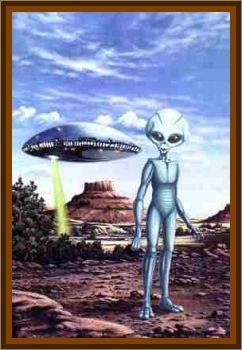 Ignat Buhushin, a reporter for the local Orenburgskaya Gazeta, told his colleagues that he was going on a meeting with extraterrestrials that was scheduled to occur on the night of the 13th. To his amazing claim he added that he had already encountered UFOs three times before videotaping one the night of December 13, 2004.

Ignat did not return to his job the next day and his worried colleagues began searching for him. They even published an advertisement in the press, asking for help in locating the lost man. But while the time passed nothing was heard from Ignat. Finally on April 6, a woman, Lubov Mazylo, the editor of the Sorochinskiy Vestnik local newspaper, called the city of Orenburg with an unexpected question, asking them if they new a man named Ignat Buhushin. She added that he was alive, healthy but suffering from amnesia.

It was incredible news because the small town of Sorochinsk was 110 miles in distance from Orenburg. Ms. Mazylo reported that early one morning a strange man had entered her office, the young man was decently dressed, was unshaven, dazed and confused and with a worried look on his face. He refused food and only drank coffee. He told her that only today he had realized he was in the town of Sorochinsk. Soon the newspaper staff realized he was Buhushin and put him on a minibus going to Orenburg.

Several hours after the bus arrived to the city, he had a second time lapse, he had briefly stepped out of the bus to smoke a cigarette and in the blink of an eye the bus was now gone, the people around told him that the bus had already departed 30 minutes ago. Ignat then told his friends that it had all started when a reader from the town of Orsk told Ignat that he frequently observed UFOs in the city since 2004 near a vacant and abandoned building in the outskirts of the city. And told Ignat that the aliens would return on March 13, 2005, so the curious Ignat went alone to meet the aliens, at approximately 10:00 p.m. he took his photo lens camera with him and climbed the 16 story building, (the building was in the process of being remodeled). There a bright flash of light blinded Ignat, he closed his eyes for a second and when he opened them he found himself standing on the railroad tracks. He only saw dirty snow around and some distance houses about 1 mile away. He happened to know that the town was Sorochinsk and went almost completely mad when he was told that it was already April 6. He could not explain where he had been for the last 24 days.

Regressive hypnosis was recommended but the witness asked to wait, he wanted some time to rest before he did it.