Circular Object With Dome and 2 Figures 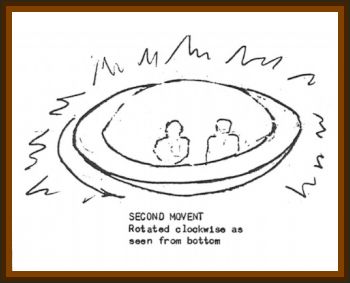 A more recent report that contains some striking similarities to Mrs. Moreland’s story of more than 8 years before was investigated by C. Reed Ricks, who sent NICAP the details.

Marilyn Wilding, age 15, of Idaho Falls, went out on her front step to look for a friend coming by to pick her up. It was about 7:40 p.m. The evening was dark and overcast, cold, with snow on the ground. Miss Wilding’s attention was attracted to a light source reflecting on the snow and glancing upward she saw a large light above, partially obscured by the roof of her house.

Stepping out into the yard, she saw a large, brightly lighted object hovering not far above the end of her home. It was so bright that she was unable to perceive any other color than white. The object was circular in shape, about as big as a car.

She told the NICAP investigator that it was close enough for some one to have thrown a rock at it and hit it.

As she stood looking, the object tipped and rotated partly so that she was able to see that it had a domed top. In the dome, which was transparent, she could make out the indistinct outlines of 2 figures, but she was unable to make out any details because of the glare.

She ran into her house and called for her younger sister to come and look, but the youngster was barefoot and did not come out. Miss Wilding then ran back outside in time to see the object begin to rotate, in a clockwise direction as seen from below. It maintained its tilted attitude while rotating, and therefore gave the appearance of wobbling. With this motion, it began moving away toward the North. As it receded into the distance, the light dimmed and turned orange in color.

The UFOs departure was observed from inside the house by Miss Wilding’s younger brothers and sister, who had been alerted by the witness. Mr. and Mrs. Wilding were not at home at the time of the incident occurred. In her written report, Miss Wilding also gave the names of the Schuldt family, neighbors, as witnesses.

At its closest, the object was no more than 300' away, and from 50' to 100' above the ground. The incident lasted for approximately 3 minutes. Besides containing a number of details similar to those described by Mrs. Moreland, Miss Wilding’s sighting may also be compared with another incident that occurred at Ririe, ID, a little more than a month earlier.