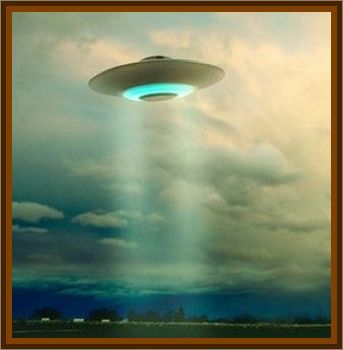 A friend of mine and I were throwing a football in his backyard around noon on a perfectly clear October sky. We started to throw high passes to each other when I saw a tiny silver object at a high altitude. I thought nothing of it because at that time there was a U.S. Naval Base located just North of New Iberia and seeing aircraft was a frequent everyday sight for us.

We continued to throw the football to each other and I decided to throw a high pass back to my friend. We both looked up at the ball and we both became nearly speechless. There was a huge circular chrome craft with a circular shaped bar going from one side of the craft to the other. It had a clear glass looking globe in the center.

I told my friend to get his dad, quick. His dad came out of the house and saw it. When he came out the craft rose in altitude until it was out of sight. It took it maybe a second or two to do this. The strange thing about it was it made no noise at all. His dad who was a Naval officer in World War 2 went inside immediately and called the Naval Base. He spoke to the radar personnel and asked them if they had seen anything strange on their radar and he gave them the approximate time we saw this thing.

Every time I go back home and run into my friend I ask him if he remembers what we saw and he says yes. I asked him to draw it to make sure it was what I remembered what it looked like and his sketch matched what I saw.

I don't tell anyone about this anymore because they don't believe it and think I am crazy. Some say they have seen strange lights at night but my buddy and I saw this craft on a cloudless day.