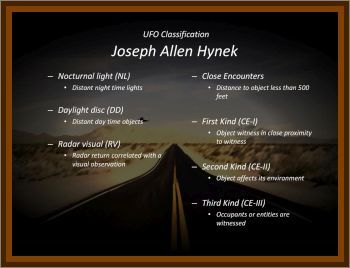 Dr. Josef Allen Hynek, was a United States astronomer, professor, and ufologist. He is perhaps best remembered for his UFO research. Hynek acted as scientific adviser to UFO studies undertaken by the U.S. Air Force under three consecutive names: Project Sign ( 1947–1949 ), Project Grudge ( 1949–1952 ), and Project Blue Book ( 1952 to 1969 ). For decades afterwards, he conducted his own independent UFO research, developing the Close Encounter classification system, and is widely considered the father of the concept of scientific analysis of both reports and, especially, trace evidence purportedly left by UFOs.

UFO reports differ in many details. But there are a number of similarities that recur in such features as shape, maneuverability, appearance, disappearance, sound and color. There are several basic observational categories into which sighting reports may be classified.

A. Relatively Distant Sightings, or Distant Encounters. ( DE-I Through DE-III )

Nocturnal Lights or ( DE-I ): These are sightings of well-defined lights in the night sky whose appearance and/or motion are not explainable in terms of conventional light sources. The lights appear most often as red, blue, orange or white. They form the largest group of UFO reports.

Daylight Disk or ( DE-II ): Daytime sightings are generally of oval or disc-shaped, metallic-appearing objects. They can appear high in the sky or close to the ground, and they are often reported to hover. They can seem to disappear with astounding speed.

Radar-Visual cases or ( DE-III ): Of special significance are unidentified "blips" on radar screens that coincide with and confirm simultaneous visual sightings by the same or other witnesses. These cases are infrequent.

B. Relatively Close Sightings ( within 200 yards ), or Close Encounters. ( CE-IV Through CE-VII )

Close Encounters of the First Kind ( CE-I ). Though the witness observes a UFO nearby, there appears to be no interaction with either the witness or the environment.

Close Encounters of the Second Kind ( CE-II ). These encounters include details of interaction between the UFO and the environment which may vary from interference with car ignition systems and electronic gear to imprints or burns on the ground and physical effects on plants, animals and humans.

Close Encounters of the Third Kind ( CE-III ). In this category, occupants of a UFO - entities that are human-like ( "humanoid" ) or not human-like in appearance - have been reported. There is usually no direct contact or communication with the witness. However, in recent years, reports of incidents involving very close contact - even detainment of witnesses, have increased.

The Kinds of Evidence

In addition to eyewitness reports, scientific evidence for the presence of something very unusual falls in these categories:

1. Physical Traces. Compressed and dehydrated vegetation, broken tree branches, and imprints in the ground have all been reported. Sometimes a soil sample taken from an area where a UFO had been seen close to the ground will be determined, through laboratory analysis, to have undergone heating or other chemical changes not true of control sample.

2. Medical Records. Medical verification of burns, eye inflammations, temporary blindness, and other physiological effects attributed to encounters with UFOs - even the healing of previous conditions, can also constitute evidence, especially when no other cause for the effect can be determined by the medical examiner.

3. Radarscope Photos. A tape of traces from a radar screen on which a "blip" of a UFO is appearing is a powerful adjunct to a visual sighting, because it can be studied at leisure instead of during the heat of the moment of the actual sighting.

4. Photographs. While it might seem that photographs would be the best evidence for UFOs, this has not been the case. Hoaxes can be exposed very easily. But even those photos that pass the test of instrumented analysis and/or computer enhancement often show nothing more than an object of unknown nature, usually some distance from the camera, and very often out of focus. For proper analysis of a photo, the negative must be available and the photographer, witnesses and circumstances must be known. In a few exceptional cases, photos do exist that have been thoroughly examined and appear to show a structured craft.

Since the creation of these classifications, there have been three new additions in regards to Close Encounters:

Close Encounters of the Fourth Kind ( CE-IV ), involves the person being unwillingly taken and experimented on inside the alien craft ( Otherwise known as abduction ).

Close Encounters of the Fifth Kind ( CE-V ), is when there is direct communication between aliens and humans. This is the rarest one of them all and very few people have experienced it.

Close Encounters of the Sixth Kind ( CE-VI ), is when contact between aliens and humans results in permanent injury, and in rare cases, even death.

And additionally, a Seventh.

Close Encounters of the Seventh Kind ( CE VII ), The Black Vault Encyclopedia Project proposes this as mating between a human being and extraterrestrial that produces a human-alien hybridization, usually called a Star Child. This concept similar to ideas promoted by ancient astronauts theorists like Erich von Däniken, Zecharia Sitchin and Robert K.G. Temple, in that extraterrestrials interacted with, perhaps interbred with and influenced ancient human beings in the past. This concept of CE VII is at odds with Hynek's original concepts, however. Hynek's CE III specifically avoided describing UFO occupants as "aliens" or "extraterrestrials", contending that there was not enough evidence to determine if beings associated with UFOs had an objective physical reality, let alone to confirm their origins or motives.