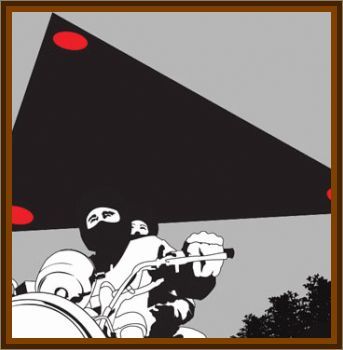 Ron Hydes claimed that at 5:00 p.m., he had been en route from Melbourne to Sydney when he found himself surrounded by a bright, bluish white light. He said it was quite obviously coming from above him. As he slowed down to look up to see where it was coming from, he was blinded by the light and had to stop his cycle. He said the light was so bright that it obliterated the surrounding terrain so that all he could see was the light and a little bit of the road ahead of him.

Ron stopped the bike, left the engine running, and put it on the stand. Taking off his sunglasses, he wiped his eyes and when he opened them, he saw a disk shaped craft about 100' away to his left and off the road.

He surmised that this object was the source of the light above him a few seconds before when he had stopped his cycle, but he did not actually see the object land.

The craft gave the appearance of two plates joined together at the rim, the top half being silver quite like high polished silver and either a very dark gray or black underneath. No light emanated from the object as it rested on the ground.

After spotting the craft beside the road, Ron was amazed, and continued to look at it for a minute or so until his eyesight came back to normal, it took a little time for his eyes to adjust after the blinding from the bright light source, whereupon he realized the object was not on the ground, but was in actuality about 3' or 4' above it.

He could see nothing supporting it. At about that time, a car went by, Ron wasn’t sure it was a car, but at least some kind of vehicle passed, and Hydes turned away from the object to flag down the vehicle.

When he turned back toward the craft, there were two figures on the side of the object closest to him. They appeared to be about 5' tall, but he admits they could have been a bit taller, as he was not precisely certain of the distance the object was from his location. The persons were dressed in some sort of metallic coverall which did not appear to have buttons or zippers or anything of that nature indicating a closing. Ron said the clothing had the same sort of metallic sheen as the disk behind them. What he originally thought were abnormally sized heads he soon realized were actually helmets. These helmets were not clear, at least he could not see through them , but they were darker than the suits.

He described them in this manner:

They were obviously dark colored, just like a fish bowl popped on somebody’s head, but they weren’t clear.

Hydes also said that he felt that the figures came from the back of the object, or the side away from him, for he did not feel that he had looked away long enough for them to have opened a door, disembark, then closed a door again. He assumed that as they stood there, they were looking at him despite the fact that he couldn’t see their faces for they were facing him.

At this stage, although a little frightened, Hydes was still curious and he took a step forward to see what would happen and the two figures did the same and Ron became even more frightened. The three stood and looked at each other for some time and then one of the figures, the one on the left, took another couple of steps toward Hydes and lifted his hand in a beckoning gesture, the same gesture one would use to call somebody across a street or something of that nature.

It was at this stage that I panicked and I just dived on the bike and took off down the road, Hydes reported.

Hydes said that he neither saw the persons get out of the disk nor get into it, but that quite obviously, they belonged to it.

After getting on his bike, Ron proceeded down the road at what he estimated to be 100 miles per hour. He shortly realized that the object was keeping company with him when he heard a humming sound and knew straightaway what it was.

He tried to flag down a couple of cars and point out the object to them, but the people in them acted as though they had not seen anything out of the ordinary.

Hydes felt that he had been on the road a minute or two before he noticed that the object was with him again, but admitted that it could have been following him from the moment that he left the area where the disk had been, and he might not have known it.

The craft preceded him down the road at a distance of between 100' and 200' and 100' to 200' altitude. He said he looked for a house or farm or something to pull up to, but found nothing.

When he had first spotted the object, he began to slow down and the object decreased its speed to correspond with his until he was nearly stopped. When he last observed the object, he was at a standstill in the road. He had decided that there was nowhere to go so he had might as well stop, so he did.

When he had left the original spot where the craft had been on the ground, he had been flat out doing maximum speed for his cycle which was between 120 and 125 miles per hour. And when he slowed down, the object did so correspondingly until his speed was 3 or 4 miles per hour.

It was then that the object tilted its base toward Hydes and shot straight up into the air at about a 45° angle and vanished in seconds, he said.

Ron said about the only structural detail he observed. When the craft was on the ground, it had a bulge or cupola on the top and when it was in the air, when it leapt in front of his cycle as he made his escape, it was pinkish in color much as if it was reflecting a pink sunset. However, this was not the case, for the sun was still above the horizon and also, the whole of the craft had the same color.