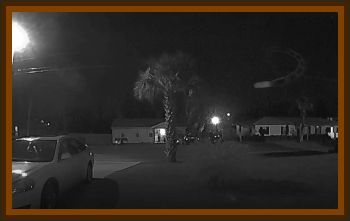 An off duty Huntington officer was warming up his car when he saw it first.

He radioed for an extra set of eyes, he got 2. Two fellow officers looked skyward and saw it, too. All 3 are Huntington law officers, guys who have seen just about everything. But this time, they didn’t know what they were seeing.

They’re hoping someone else might have been looking toward the sky shortly after 2:30 p.m. Friday, December, 26, and can at least compare notes, if not provide an explanation.

The object, seen from just north of the city Police Station, came out of the northwest to the steeple of a near by Catholic Church, then shot straight back north.

It didn’t make any noise, and it remained in their sight for less than a minute. But it was big described as the size of a hot air balloon or a backyard trampoline and low enough that one officer thought it was going to get hung up on the steeple of the church.

Normally, such an object passing over the city would have lit up emergency lines. But this one didn’t. No one called 911, no one called city or county dispatch, and no one called the State Police.

All 3 officers may have been the only ones to see it. And for a few days, they didn’t say anything about it.

We thought people would think we were crazy, one said. But now, curiosity has the best of them.

Did anyone else see it? And what was it?

The officer making the original sighting had finished his shift at 2:30 p.m. the day after Christmas and was warming up his car, parked across police station. He was sitting in the car, facing north.

It came from a long ways off, he said, describing the sighting a week later.

First it looked like a parachute that you can steer, black and curved, but there was nobody in it. It started rolling, a slow roll, and turned upside down. Then it looked like a giant set of bird wings. It did more rolls, and turned into an oblong circle that was orange. It wasn’t any kind of flying machine that I can think of, and it’s not like a ’50s flying saucer. It was that big, but it didn’t have a hump in the middle.

The second officer who answered the call said his first impression was that it was a tire in the sky, but that made no sense. The first officer said the object changed shape 3 or 4 times. It moved in a straight line, tumbling as it moved, and made no noise.

The third officer to verify the sighting had just walked out the stations backdoor, heard the radio traffic and looked up.

It was so big, within no time at all I spotted it, he said. When I first saw it, it was going in a flat plane, hovering, moving slowly right toward the church. It would glide, rotate the wide way around, and stay at one level, then it stopped, began moving in a circular motion, and turned bright orange. It went flat again, and hovered over the steeple.

The officers believe the object turned orange when it reflected the sunlight, like a compact mirror would if you twirled it.

It appeared to be moving along at treetop level, no higher than the roof of the church. It disappeared from the first officers view after it went behind the church steeple, but the other officers who had slightly different vantage points said it went behind the steeple and moved directly North.

The second and third officers were 30' to 35' apart. The agreed the sighting lasted 30 to 45 seconds.

I can’t imagine how it could possibly be anything I could relate to. The object would stop and then spin slowly, a maneuver no known aircraft can accomplish. I was never really afraid, just in total amazement.

The pastor of the Catholic Church, said he didn’t see anything unusual that afternoon, and hasn’t received any phone calls from anyone who did.

That’s the first I’ve heard of it, he said Friday.

Managers at the Huntington Municipal Airport and Fort Wayne’s Smith Field said there were no records of any out of the ordinary craft making either a takeoff or landings.

The description of the object’s movement is not unreported in the annals of UFO sightings. It’s pretty common that such an reported object comes over, stops and hovers.

This is not the first time a tumbling motion has been reported, and then it moves off. The size and movement of the object have eliminated most common possibilities. Investigation still in process.