Glowing Green Object the Size of a Peanut 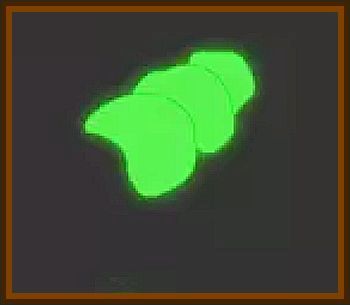 I was a second year college student studying a course in Entomology.

One evening I went into a nearby janitor closet to get a broom to sweep up my room. It was nighttime and the closet had a window.

A glowing green object caught my eye against the black night outside. It moved, Of course,

I also moved to the window to get a closer look.

The glowing thing drifted to the top center of the window as I went forward. It strangely moved to follow my head as if it was curious. It was approximately the size of a peanut shell seen from the side, with no details to be seen, only the bright green light.

My immediate thought was that this was alive and must be some strange glowing insect that would make a great addition to my collection.

Hoping that it would not go away, I hurried back to my room to get my butterfly net. The excitement increased as I returned to find it was still hovering outside.

Pulling a step stool over to the window, and climbing up, the bug and I were face to face.

Again, it moved slowly side to side watching me as I moved to open the window from the top. It moved a few inches as I raised my right hand, grabbed the handle and pulled the window slowly in to quietly open it.

By this time I was really excited! It was still hovering around and was still in reach. I brought my net up to make a sweep at it. As I placed the net at the opening it instantly went straight away, without a sound, at unbelievable speed.

It left a trail of light in my eyes.

Next, I tried to find an insect in my entomology textbook which fit the object’s description.

It did not exist.

Thinking about this event many times over the last 47 years has led to my conclusion that the object was definitely intelligent. It demonstrated curiosity which is a sign if intelligence and thinking.

Precise movement is common for an insect but not combined with movement showing curiosity. Also important was the complete silence. Insects fly by beating the air with their wings which creates a buzzing noise. This was a fairly large insect which should have made a significant sound when it flew away at such speed.

Similar reports of silent hovering objects have been seen following aircraft in flight.

I wanted a record of this event for future reference.