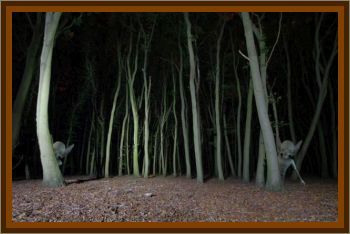 In a somewhat confused sequence of events, Chris Bledsoe, his 17 year old son, and 3 friends, Donnie Akerman, David McDonald & a man named Gene were hunting in this isolated area and had set up a fire by the river for the night. Chris at one point was walking along a nearby road or trail when he heard loud scurrying sounds from both sides of the trail. Somewhat unnerved and discarding the possibility that it could have been deer, Bledsoe ended up in a large field near the main road when he suddenly saw 3 large orange spheres moving down towards the ground and then stop to hover just above the trees, less than a mile from him.

He watched for about 10-15 minutes and then joined the other men by the river. At first Chris could not locate his son and ran frantically into the woods looking for him. Suddenly his son came stumbling out of the woods saying that he had seen some strange beings, he seemed terrified and very serious. Around the same time the other men saw what appeared to be 6-8 stars, fly from different parts in the sky and converge in a group and then all of the objects flew side by side and flew over their heads and landed or went out of sight on the other side of the river about 400 yards away. All lights were round bright white, blinding & about 100 yards in diameter.

This terrified the group, they all decided to go home. Most left their fishing gear behind and jumped into Bledsoe’s truck. When they made it up the top of a hill Chris slammed on the brakes and was shocked to see a brilliant white egg shaped object with a tail with long spikes all around the middle of the front section hovering 20' over the main road, 200 yards from them. It looked like the spiked area was making slow revolutions.

As the men stared in fear the object seemed to rise up, and shot off just over the trees out of sight. Chris, the driver, then dropped his friends at their homes. Chris & his son finally got home and about 4 hours after arriving there was a noise around the house which sounded like a prop jet flying at tree top level right over the house. He ran out but could see nothing. Within 30 to 45 minutes all his dogs in the kennel were barking frantically, in a manner which usually meant that there was something there that was not supposed to be. His Chesapeake Bay retriever was also barking and looking towards the kennel area. His son was scared, but he convinced him to come with to see why the dogs were so stirred up. When he opened the door his retriever took off, running just behind the kennels. She stood there with her hairs standing up barking at something in the bushes behind the kennel. The dog then took off again after whatever it was, followed closely by Chris and his son. They ran down the roads that lead to the kennel to the backyard and the very rear of his property trying to cut off whatever the dog was chasing.

When Chris arrived at the Blue Berry Hedge Row at the rear of the property the dog had stopped and was barking in a panic. Chris stopped also, staring dumbfounded, at a 4' tall creature that was also staring at him. The creature looked as if it had a clear glass like covering around it and appeared to have a faint glow of red and black. He could not see the face what it looked like it had a pair of goggles and a black or dark covering over the lower part of its face sort of like a mask. The whole body appeared to glow. It then disappeared just as the dog and Chris’s son got right up on it. His son then explained to Chris that it had been the same kind of creature he encountered during the hunting trip earlier.