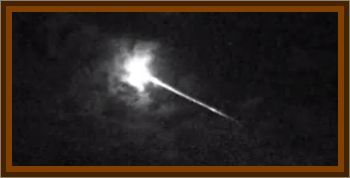 Below is the full report of the encounter sent in a letter by Captain Hull to his friend, the president of the CSI-NY Civilian UFO Investigation group where he describes being flabbergasted and confounded by the object's aerial maneuverability. The pilot also reminds him that he was objectively skeptical and cynically critical of most of the purported saucer sightings, yet asks the question: Was this was a machine based on earth?

The sighting which follows is of particular interest because it was made by an expert observer, a veteran airline pilot, who was formerly extremely skeptical on the subject of flying saucers.

In fact, in 1953 Captain Hull wrote an article for Airline Pilot magazine titled:

The Obituary of the Flying Saucers.

We reprint, with his permission, a slightly condensed excerpt from the letter to CSI President John Du Barry in which he described his experience.

On the night of November 14, 1956 I was flying a Viscount at high altitude from New York to Mobile, AL. We were above a layer of clouds which were occasionally broken, giving us a glimpse of the ground now and then. At 10:10 p.m. E.S.T., when only about 60 miles from Mobile, my co-pilot Peter Macintosh and I saw what we thought was a brilliant meteor. We were flying south-southwest and it fell across our path from left to right, first becoming visible at the top of the windshield. The Viscount has wonderful visibility upward. It decelerated rapidly, just as any meteor does when entering the denser layers of ths earth''s lower atmosphere, and we expected to see it burn out with the customary flash, which pilots often see, but which people on the ground are often denied.

Imagine our consternation when this brilliant light did not burn out, but abruptly halted directly in front of us. It was an intense blue-white light, approximately 7 or 6 times as bright as Venus when this planet is at its brightest magnitude.

What the hell is it, a jet?

His first thought, of course, was that the object was a diving jet fighter which had turned sharply away from us and in departing, was giving us a view right up its glowing tailpipe. Instantly I knew this could not possibly be an airplane. I have seen the glow of too many jet pipes at night not to recognize one when I see it. It was not the right color; it did not diminish in size, as a departing jet fighter's exhaust should have; and it remained motionless directly ahead of us, how far I cannot say, but it must have been quite a few miles.

I quickly grabbed my microphone and called the Mobile Control Tower.

Bates Tower, this is Capital 77. Look out toward the north and east and see if you can see a strange white light hovering in the sky.

Capital 77, this is Mobile Bates Tower. We are unable to see much of the sky because of a thick cloud cover. Do you think the object is in our vicinity?

Affirmative. It looks like a brilliant white light bulb, about one tenth the size of the moon. It is directly ahead of us and at about our altitude, or slightly higher. We are right over Jackson, AL and have descended to 10,000'. Please initiate a call to Brookley Field Tower, Air Force Field 20 miles southeast of Bates Field, and ask the controller if he can see it on their big radar scope.

We did not have the military frequency crystals in our transmitter to work Brookley Tower.

Just after this exchange, the object began to maneuver. It darted hither and yon, rising and falling in undulating flight, making sharper turns than any known aircraft, sometimes changing direction 90° in an instant. All the while the color remained constant, a brilliant blue-white, and the object did not grow or lessen in size. Macintosh and I sat there completely flabbergasted at this unnerving exhibition. I thought of calling the passengers over the public address system, but the object was dead ahead of us and putting on its performance in an area whose arc was not large enough to enable anybody in the cabin to get a view of it out the side windows. After a half minute or so of this dancing, unorthodox flight the object suddenly became motionless and hovered dead still. We were simply confounded by this.

Bates Tower called back: Capital 77, we are trying to raise ths Brookley Tower

Right at this moment the strange light began another series of crazy gyrations, lazy 8's, square chandellea, all the while weaving through the air with a sort of rythmic, undulating cadence, the likes of which neither Pete nor I had ever seen. Then, apparently content at the consternation which it had wrought, the object shot out ever the Gulf of Mexico, rising at the most breathtaking angle and at such a fantastic speed that it diminished rapidly to a pinpoint and was swallowed up in the night. This unearthly exhibition probably went on for at least two minutes, according to our best judgment. I glanced at the clock and noted it read 10:12.

The most puzzling thing about the whole occurrence, aside from the dancing flight, was that the object, whatever it was, had remained at the same distance from us throughout the performance. How do we know this? It never increased in size, and yet we were bearing down on it at more than 5 miles a minute in the Viscount. If it was in view two minutes and performing in one area we should have been at least ten miles closer to it. How, any object that flies certainly looks different when viewed at such a great variance in distance. So this UFO must have managed to remain at the same distance from us throughout the entire display.

If you know southern Alabama you know that it is pretty desolate country, with few inhabitants and only a few small hamlets between Mobile and Montgomery up in the middle of the state. We were above the clouds, precluding any reflections of searchlights from below. I have seen hundreds of advertising searchlights playing on clouds, and this was nothing remotely related. Likewise I am summarily ruling out aircraft, at least the ones we know, balloons, , or any other earthlaunched device within my ken. The one thing which I can't get over is the fact that when it came, it came steeply downwards when it departed after its amazing exhibitio. It went steeply upward. Now I ask you, John, is this machine based on the earth?

I followed up on this spectacular sighting after landing at Mobile, The control tower operators had reached Brookley after a slight delay, but the controller had seen nothing, and since no night flights were in progress, the surveillance radar had not been energized at the time.

In case any of your members would like to know my background, you may give it to them. You will remember me as objectively skeptical and cynically critical of most of the purported saucer sightings. But I think you have to believe a veteran airline pilot with 17 years of service, 15,000 hours and 3 million miles in his log-book. I am seeking no publicity. I didn't report this sighting to the press and not a word has ever been printed about it until this moment. W.J. Hull