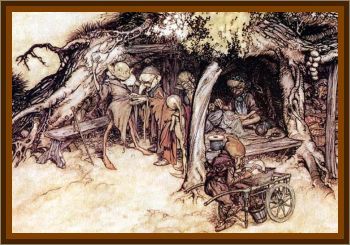 In Iceland, elves, alfar in Icelandic, are beings thought to be smaller than most humans. Elves are thought to live outdoors, and to rarely speak. While some Icelanders believe elves to be a very distinct group, many have come to see them as synonymous with another group of mythical beings known as the Huldufólk, or Hidden People.

According to a study done in 2006, 32% of Icelanders believe the existence of these beings to be possible, while 24% believe their existence is either likely or an outright certainty.

Celebrating elves and huldufolk is common in Iceland. For instance, it is customary for Icelanders to clean and leave food for elves as it's believed they hold parties late at night. On New Year's Eve, it is thought that Huldufólk move to new locations. As a result, it's traditional to leave candles out to help them find their way. Finally, Þrettándinn, or Thirteenth Night, is celebrated on January 6th and marks the last day of Christmas in Iceland. On this day, bonfires called álfabrennur, of Elf Fires, are commonly lit.

The most interesting Huldufólk holiday might be Midsummer’s Night, when it is believed that standing at a crossroads during the late hours may bring wandering Huldufólk who will lure you with gifts and money. It's believed that taking these gifts will lead to misfortune.

Even outside the holidays, first hand experiences of Huldufólk sightings have been noted by citizens of Iceland, and these stories extend beyond the occasional anecdote. Tales of elves and Huldufólk extracting revenge on those who disturb their homes are well documented.

The most famous story involves Álfhólsvegur, Elf Hill Road, a road that was at one point intended to run through Álfhóll, a hill where elves are believed to live. Construction was begun on this road on two separate occasions, but each time a collection of misfortunes and thefts prevented it from being completed.

Building projects in Iceland are sometimes altered to prevent damaging the rocks where they are believed to live.

According to these Icelandic folk beliefs, one should never throw stones because of the possibility of hitting the Huldufólk.

Icelanders are few in number, so in the old times we doubled our population with tales of elves and fairies.

They are also a part of folklore in the Faroe Islands. In Faroese folk tales, Huldufólk are said to be large in build, their clothes are all grey, and their hair black. Their dwellings are in mounds, and they are also called Elves. They also dislike crosses, churches and electricity.