Father Of Many Alien Hybrids 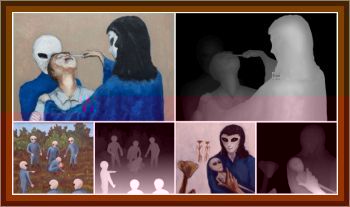 David Huggins was born in Georgia. In 1943 his detailed highly sexual alien encounters started in 1951 while the eight year old played on the family farm.

Huggins initial experience started during daylight around the farm, at night the creatures would appear in his bedroom and escort him to a metallic, egg shaped UFO.

He first encountered a short alien with large glowing eyes that was covered in brown fur, then the Alien Mantis, which often seemed to be in control, followed by typical Alien Grays, eight the first time. Short creatures wearing identical blue jumpsuits. A hybrid named Crescent, who appeared initially as a mother figure had large eyes, pale skin, long hair that seemed to be a wig, and definite human anatomical features.

These encounters ceased when he was 11 and the family moved to Acworth, a UFO followed them there and then the aliens disappeared until he was 17. At that point he lost his virginity to the hybrid Alien Grey called Crescent on a visitation where she said he was of age and now it was time.

Huggins writes he was highly attracted to Crescent and strange as it was, Crescent was a passionate lover and after sex with her on top, sometimes in woods, sometimes on the UFO, she always used devices on him to extract his semen and often he was taken to a room where he was made to have sex with other younger female Hybrid Aliens as well, but always Crescent masturbated him before ejaculating, milking him of his semen in a group gathering of Aliens and Mantis that had a pronounced energy ceremonial feeling to it with the ejaculate collected into a holy device.

In 1965, aged 19, Huggins moved to New York City to study art. From 1963 until 1971, David experienced two to three visits a week from aliens who emerged from a portal that appeared in a wall of his apartment. When David found a girlfriend, the aliens frightened her so badly that she left the city. Huggins thought the aliens wanted him to themselves, but the sex was so frequent that the annoyance to his life was worth it. He believes the creatures are from a parallel universe, and seemed to be based in a complex of subterranean caverns beneath the ground.

In the early 1970s the aliens informed Huggins that they were leaving his life. He was made to forget their existence, except for a future date in 1987. He did not know it then, but the beings would return at that time, nearly 20 years later. Huggins was reintroduced to Crescent and to a progeny of his children from their union, also a clone of himself and several other humans. He was never given any prophetic word of wisdom, he was only ever just a sexual deliverer of the gene they required.

Huggins went on to live a normal life, marrying and fathering a child while working at a deli and pursuing his Alien Sex Art. He claims to have continuing contact with the aliens.