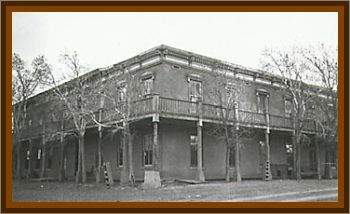 The St James Hotel is one of the most interesting haunted hotels in the United States not only because of its long and colorful history, but also because it is home to several restless spirits. In fact, numerous former owners and guests of the hotel have reported various unexplained and supernatural events during their stay, while several psychic investigators have confirmed at least three spirits to be permanent residents of the hotel, with several more passing through.

The most interesting portion of the St. James Hotel, however, is the 2nd floor. People who have worked on this floor as well as in its rooms and hallways have reported various unusual phenomenon, including cold spots, the smell of cigar smoke, even when there is no one around smoking, and strange lights. The most prominent of these haunted places is Room 18, where Thomas J. Wright, a man who reportedly won the hotel in a poker game was shot in the back as he tried to leave his room.

According to legend, Wright as well as various other ghosts, haunt the St. James Hotel, and some of them may even have been responsible for the mysterious deaths of several guests. So if you would like to learn more about the strange world of St. James Hotel then here's what you need to know about it.

Room 18, or Haunted Room 18 as it known in local legend, is considered by St. Jame's Hotel's staff to be the most haunted room in the entire hotel. Due to the nature of the room and its haunted reputation, very few people are ever allowed to see what is inside.

In terms of appearance, Room 18 is sparsely decorated. It features a bed frame without a mattress, a rocking chair, a bureau, a basin, a pitcher, an empty Jack Daniels bottle, a handful of cards, several shot glasses and a few other items that belong to the era of the wild west.

Room 18 is also off limits to most people, because it is associated with the mysterious deaths of several hotel patrons, most of them attributed to the ghost of Thomas Wright. Furthermore, due to the dangerous nature of the room, employees of the hotel advice all of their guests to avoid that area while traveling through the floor. Likewise, most requests for visiting Room 18 are denied due to its troubling reputation.

Not much is known about Thomas J. Wright's life. According to legend, he was killed at the door of Room 18 shortly after winning the rights to the hotel in a poker game. The cause of his death was a shot from the back, though he didn't die instantly. Bleeding and wounded, Wright still managed to go back into his room where he bled to death.

Because of the nature of his death, Wright's angry ghost is believed to haunt St. James Hotel's Room 18 to this very day. Most of the noises and strange sightings reported about Room 18 is associated with Wright's ghost. One former owner of the hotel even claims that something pushed her down while she was inside the room, while other witnesses claim that they see a ball of orange light floating around the upper corner of the room.

However, the most infamous stories about Wright's ghost involves the mysterious deaths of several guests who stayed in Room 18. These deaths are generally associated with Wright's haunting, which is why Room 18 and its surrounding areas is considered off limits for most guests of the hotel. This is also why, for the safety of the guests and the employees, the door of Room 18 is kept pad-locked at all times.

Aside from Thomas J. Wright's ghost and the infamy of room 18, it's also worth adding that there are other ghosts in St. James Hotel. One other interesting specter is Henry Lambert's, the original founder of St. James Hotel, second wife, Mary Elizabeth, who haunts room 17. However, unlike Wright's ghost, Mary Elizabeth is considered by hotel legend to be the hotel's protector. People who pass through room 17 allegedly smell her rose-scented perfume, while at other times, she appears as a white female shaped image in the hallways.

Another interesting ghost is that of a small old person, who is known to hotel employees as The Little Imp. Unlike Mary and Thomas, this particular ghost likes to laugh and play tricks. Mysteriously lost objects as well as unusual occurrences are also usually attributed to this ghost and its penchant for trickery.

Other spirits are also said to pass through the establishment. For the most part, these ghosts are said to be transient in nature, and do not usually interact with the guests or staff in any meaningful way. The only exception is when they want to make their presence felt, such as when they cause items to fall off walls or cause equipment and appliances to behave unpredictably. Furthermore, there are also reports among guests and employees that they feel like they are being watched even when they are not on the second floor.

Needless to say, due to the supernatural activity of St. James Hotel, it has been featured in various TV and internet shows, including A Current Affair, Ghost Adventures and Unsolved Mysteries. The hotel also enjoys popular attention from travel agencies and tourism websites not only for its supernatural reputation, but also because of its historical importance. In fact, St. James Hotel has catered to numerous figures, including Buffalo Bill, and the hotel is considered by many to be an important historical landmark.

Visitors come to see the hotel's unique historical features as much as to see their infamous ghosts. So if you're interested in both then this is one haunted hotel that you should consider visiting.