I'm Still not Sure What I Saw 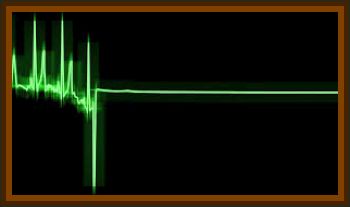 This particular experience has always stayed with me, probably because I'm still not sure what I saw, so any information would be helpful.

My father had a pretty serious stroke back in 2004, was unconscious for about 2 weeks, and spent a total of almost 3 months in the hospital, I used to visit him everyday from morning until night.

We didn't have any insurance at the time, so he had to stay in a ward with up to 7 other patients at a time, although usually it was 3 to 4 patients.

One of the patients was a man in his mid to late 60s. He was a very kind man who's bed was directly in front of my father's.

One day I came back from a quick lunch break only to find my father sleeping, and there was nothing on the TV for me to watch. I was bored and sort of zoned out staring in the general direction of the elderly patient in front of me, who happened to be getting a visit from his kids and grandchildren.

As I was zoned out, I started to notice something floating above this man. I looked up and saw three shadowy figures floating in a circular pattern around him. They looked like 3 people wearing dark cloaks, but with no hands or feet, and seemed to be diving in and out of a hole I couldn't see.

One moment they would disappear into the hole, and the next they would pop right back out.

I sat there stunned as I watched this, and thats when one of them broke off from the 3 and floated in my direction. It got right in my face, and I just backed my head as far back as I could in the chair I was sitting in. After that it floated back to the other 3 and then they all went out the back wall and disappeared.

I had the most sickening feeling that this man was going to die, I just knew that these things were there because he wasn't going to make it.

The elderly patient had been fine the whole time I had known him, but later that night he started complaining about stomach pains, the next day he was moved to the private room next to ours, and the day after that I ran into his daughter who was crying her eyes out.

Knowing the answer, I asked her what's wrong?

My father died today, he was fine, and then he just got sicker and died, we still don't know what happened.

I felt so sad for her and that lovely family, but there was no point in telling her what I saw, so I kept it to myself.

To this day I'm still not a 100% sure of what I saw, but it was pretty disturbing if I'm being honest.