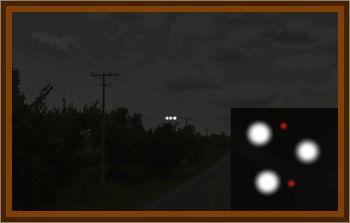 It was sometime around 1970 that Bill Hoover had an experience that changed the way he sees the world, and the universe, and, well, everything.

He was working the night shift at the P.H. Glatfelter paper mill in Spring Grove. His entire family worked at the paper mill, as did a lot of the people he grew up within Pigeon Hills, just outside the mill town. He had worked previously on a fruit farm and had done some other stuff before going to work at the paper mill, an inevitability in those parts, Glatfelter being the primary industry in town, its reason for existing, pretty much.

He was a wastewater treatment plant operator. It takes a lot of water to make paper, and the mill cleansed the water it used in the process in a series of three wastewater plants, consisting of large pools and sludge beds just outside of town.

Part of his job was to periodically drive from the plant, he drove a company Jeep, to the wastewater plant, dip out some water samples and drive them back to the lab for testing. The plant ran three full shifts back then, and even though it was the middle of the night for most people, the plant operated at full steam.

That night, Bill had driven down to the treatment plant and was scooping water out of one of the sludge beds for testing when he heard something. It sounded like a vacuum cleaner, a low humming noise. It was coming from above. He thought, This is not normal.

Bill looked up and this, well, thing was right above him. It was triangular with three white, translucent globes anchoring the corners. Along one of the sides of the triangle were two bright lights, they looked like headlights. The three globes had bright red points of light in their centers.

He had never seen anything like it. He had no idea what it was. It hovered overhead for a while. He dropped his sample bottles and gazed at it. It was the strangest thing he had ever seen. He jumped in his Jeep and drove to his uncle's farm, about a half-mile away.

The thing followed him. It seemed as if it were right on top of his Jeep. It scared the bejesus out of him.

As he approached the farm, driving down the dirt farm lane, over a creek, the thing broke off, climbing straight up, Hoover watched as it disappeared into the night sky. Bill got to the farm and yelled for his uncle, who was sleeping and either slept through or ignored his pleadings. He never did come out. He was a dairy farmer, and as such, known to sleep deeply when he got the opportunity, having to get up before the sunrise to milk his herd.

Bill drove back to the plant and stopped at the guardhouse to tell the guard, Sleepy Stambaugh, so nicknamed because he looked sleepy, what he had seen. He asked Sleepy, who was in his 60s then, Hoover was 28, whether he had seen anything weird. Sleepy told him he had seen it and that it was strangest thing he had ever seen. He had never seen anything like it.

Bill continued on to the lab and told his boss what he had seen. His boss scoffed. He didn't believe him, saying that he was probably hallucinating from inhaling hydrogen sulfide wafting from the sludge beds. His boss told him that he probably just saw a swarm of fluorescent flying ants. Or something like that.

He went home that morning and told his wife, Linda, what he had seen. She believed him. Whatever it was, he told her, it wasn't a jet, it didn't sound like jet engines, and, at least back then, jets didn't hum and hover.

The next few weeks, he and Linda would sit outside their home in the Pigeon Hills looking for the thing, waiting for it to return and take them off to the stars, to Neptune, or wherever. It never returned.

A few days later, there was a story in the York Daily Record about the sighting.

A man named Robert Hake who lived outside of Red Lion reported that he was driving home from his job at Campbell Chain in East York at about midnight when he saw something in the sky. He was at the intersection of Market Street & Haines Road when he saw it, bright lights hovering over the old York County Shopping Center.

He pulled into a parking lot, got out of his car and watched as the thing climbed straight up and then moved toward him, hovering directly overhead. He said it had three bright red lights and two bright headlights on one edge. Robert told the newspaper that it made the weirdest sound you ever heard, a loud whirring or hum, like a vacuum cleaner. It flew east, and frightened and forlorned, according to the newspaper, Robert followed it until it disappeared over the old Stony Brook drive-in.

As he drove home through Red Lion, he saw a police car and stopped to talk to the officer, identified as James Tressler. The cop told him he had seen a similar object pass over town at about midnight.

Hoover clipped the newspaper story and stowed it away in an old shoe box. He dug it out recently when he heard about another account of a person reporting spotting an unidentified flying object.

It got Bill thinking. I'm a Church of the Brethren boy, said Hoover, now 74 and living in Cross Keys. I believe in God and that God made the heavens and earth. So I don't know, maybe there're other people out there. Who knows? All I know is what I saw.

It was not a normal kind of observation. It was strangest thing I ever saw.