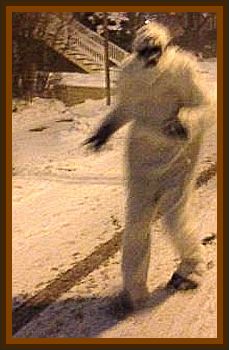 Whimsical UFO buff and UFO hoaxer Gray Barker apparently reported in his 1956 bulletin that in Hong Kong, China, in March 1955, in the evening, doors were barred in Hong Kong as the police searched for a hairy beast, said by terrified residents to be a shaggy animal over 6' tall.

A village gardener named Law Chiu had fought it and survived. The animal was covered with long, shaggy gray hair thing attacked him about 50 yards from the family temple. It stood upright when it came at him. He punched it in the stomach but the creature fell on him and they grappled for some time, then creature went away on all fours.

Some time after that, a woman saw a strange animal galloping past her vegetable garden on four legs, and as proof she noticed large triangular footprints in the soft earth. They were unlike those made by a man or ape.