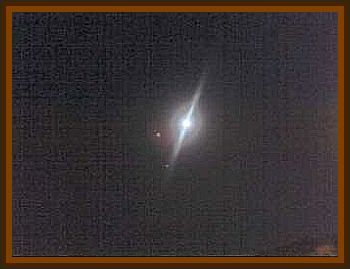 Let’s see, teen age beer party had just started more or less. I had consumed one small cup of beer at that point.

Everyone sorta laughed and most people looked out of curiosity. I looked up, and roughly 3,000' to 4,000' in the air, directly between the end of the Homer Spit, and Halibut Cove there was a large and otherwise uninteresting single white light flashing at precise intervals, roughly once every ¾ seconds

From our vantage point on the hillside above Homer, perhaps 8 miles or so away from where the light thingie was, it appeared as a rather disappointing excuse for a UFO. Just a giant light, pure white, nothing special about it, just flashing dependably.

At our distance, this light would have had to have been a fairly large thing, but not tremendous. maybe if a giant sodium light were the size of a refrigerator it might’ve been something like that. No way to know really.

So, it started moving…but only between flashes, and it could not be seen between flashes. The movement was essentially comprised of it suddenly flashing in a different location from where it had been just a split second before, the movements it made were in a vertical zig zag motion across the sky first to the right a little, then a couple big jumps, one to the left then back to the right.

Maybe 500' or 600' at a time on the larger ones, all the while maintaining the exact same time interval of about ¾ seconds from what I could tell.

These jumps made it rather significant to me since no human body could ever survive such huge and violent directional changes and the subsequent momentum of such movement. Of course it doesn’t really make much sense why a UFO would do so either.

Anyways…after about a minute it started moving up the bay, by large jumps again zig zaggy in nature… sadly, a line of trees was going to obscure my view quite soon.

I thought about running down the road in the hopes that I’d have a better view, but it seemed rather unlikely, so I just stayed put and watched it, waiting and hoping it would return to our viewable sky as I waited.

After about 2 or 3 minutes, I was fairly disappointed and figured that it was gone, so I just jogged down 450' or so, only to find that there was an amazingly clear view of the entire bay, the Homer spit and everything, so sad.

Anyways, it was totally gone at this point. I waited there for a few minutes and then rejoined the others back by the beer kegs.

One thing is for certain, no single manmade craft could have endured the rapid G-force changes the things movement would have incurred, not by a long shot, that’s the only certainty I could give about the whole thing.