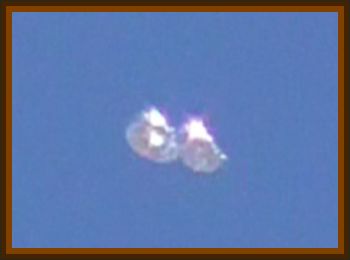 According to the reporting witness, the mysterious unidentified flying objects travelled in different directions for over 3 hours that started around 7:30 p.m. on 14th of October 2014.

This report is filed in Case 60610 in the witness reporting database of Mutual UFO Network.

The reporting witness said that she was outside on the porch together with her boyfriend having a smoke when they saw bright lights in a row in white color.

Moments later, the mysterious lights turned red and blue while travelling straight before making a sharp U turn. Adding to the mystery, these lights were then flying in a figure 8.

The reporting witness added that she saw the lights turned diagonal and she could see a diamond 3D shape. She described the color of the craft as kind of black.

According to the report, the witness saw one of the objects flying above their building and then they noticed other objects across the horizon.

The reporting witness said that the unusual flying objects would speed up into the mountain and disappear. In approximately a minute later, they would go straight up in a tremendous speed over to the right side of the mountain while changing colors of lights and their formation. The color changes would go from single blinking red light to a very bright white lights flashing in a long line.

The report added that there were also yellow/orange large balls of light floating, going straight up and disappearing.

The reporting witness and her boyfriend, with 2 friends stayed outside watching the objects for 3 hours.